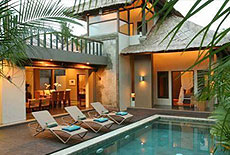 Honduras' house prices started picking up at the beginning of 2010 from a low base, following the traumatic military coup of 2009, which ousted the leftist former president Manuel Zelaya.

Soldiers took Mr. Zelaya in his pajamas early in June 28 2009 to an air force base, where he was put on a plane that carried him to Costa Rica. The Honduran Congress voted for Zelaya's ouster later that day, replacing him with Congress president Roberto Micheletti.

The main cause behind Zelaya's ouster was a dispute over rewriting the 1982 constitution, which Zelaya believed had helped worsen the country's widening poverty gap. However the Supreme Court, as well as the National Congress and all other democratic institutions in Honduras opposed Zelaya's plans, arguing that the attempt to eliminate presidential term limits could initiate one-man rule like that of his friend, Venezuelan President Hugo Chavez.

In the aftermath, Zelaya's ouster was condemned by the United Nations, Organization of American States (OAS), and the European Union, and Honduras was suspended from the OAS. However the new government did have a friend, as The Guardian comments: "Although no hard evidence has yet emerged that the US government was directly involved in his overthrow, the Obama administration did everything it could to help the coup government to survive and then legitimate itself through elections that most of the rest of the hemisphere, and the world, rejected as neither free nor fair."

A typical Central American country, peace and order problems in Honduras centre on maras (gangs) and drug cartels. There is long history of military, civil and political conflict, massive corruption and government inefficiency, inequality, and poverty. Volcanic activity, earthquakes and hurricanes have periodically devastated the country.

As the global financial crisis struck in 2009, Honduras also suffered an economic contraction, with a 2.1% GDP decline. Honduras' export-oriented economic growth is dependent to its largest trading partner, the United States. With more than 90% of remittances coming from the US, which was in recession in 2009, the amount of remittances dropped to S$2.5 billion.

"2009 was a disastrous year for anyone wanting to sell," said Janine Goben, the owner of Re/Max Bay Islands.

The Bay Islands and Roatan 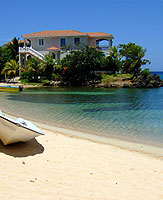 Most things are different in the Bay Islands, a group of islands - the biggest being Roatan, Utila and Guanaja - in the Caribbean Sea off the north coast of mainland Honduras. Their location makes the islands relatively safe and secure.

Roatan's real-estate development started in 1991 with a road extension opening up West End beach. In 1995, land on a beach was three thousand dollars per acre. Now it exceeds three hundred thousand dollars per acre, with much of the property appreciation occurring after 2001. "The changes in the island of Roatan have been astonishing," says Maria Monterroso of Island Properties.

Roatan has grown to a full-fledged tourist area from being a scuba destination. "At first it was all retirees, but now there are many younger buyers and developers," Monterroso adds. The International Airport can now offer direct non-stop flights on TACA airlines from Houston and Miami. Short connecting flights are also available from TACA Airlines, American Airlines, Continental and Iberia. Another development is the newly opened $62-million Mahogany Bay Cruise Center constructed by Carnival Cruise Lines which can accommodate 4,500 ships.

Utila and Guanaja islands are less developed and properties are half the cost - but few properties have road access, so almost everything is by boat.

Development on Roatan has become very controversial, as scattered single-family houses on beaches and hilltops are rapidly being replaced by condominiums. "The environment has suffered, there is no getting around it," says Monterroso.

Due to issues such as security and infrastructure, tourism on the mainland is still very much underdeveloped. Honduras has the highest murder rate in the world: 82 killings per 100,000 people, according to the UN.

There are 200 kilometres of beaches on the Honduran mainland, mostly empty. Coming from Guatemala, Omoa has the first attractive beach, dotted with houses built by wealthy Hondurans. At the large harbour of Puerto Cortes there are nice beaches, and then, before Tela, government-owned white sand beaches (Los Micos and Miami).

After the beautiful (but beachless) lagoon, the next good stretch is near La Ceiba, especially to the south where excellent beaches stretch all the way to Trujillo, now part of a North Coast sustainable development project being funded by the World Bank. One of the main developments is the Los Micos Beach and Golf Course, a $200 million plus private tourism project that started in January 2010. Two hotels will be included: a 150-room five-star Westin, and a 250-room four-star Conrad. There will also be an 18-hole Gary Player golf course, plus 459 residential villas, a golf club and a shopping centre. 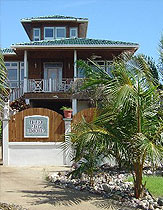 Trujillo Bay also had some residential projects, including the Alta Vista Beach (Desarrollos Vision de Vista), and the Banana Coast Cruises in the Black River Area.

"True, some sections are like East Los Angeles," he admits. "But that is no different from the US." Words of wisdom indeed.

The buyers are of two main types, he says: People who recognize the close similarities between the Honduran environment and that in Costa Rica, and those who think Roatan prices have peaked, and want to sell, and start again.

The Honduran constitution (Article 107) prohibits foreign ownership of property in Honduras that lies within 40 kilometers of the Caribbean Sea, Gulf of Fonseca or the international borders of Nicaragua, El Salvador and Guatemala and on any of the islands belonging to Honduras.

However, the Honduran National Congress passed Decree Law 90/90 in 1990, which permits foreign ownership of coastal areas under two different parameters. Firstly, foreigners can acquire a single property not in excess of 3,000 sq. m. in size to build a private residence. Secondly, foreigners may purchase as much land as they want for approved tourism projects. All purchases must be approved by the Ministry of Tourism.

Although the Supreme Court has upheld the constitutionality of Decree Law 90/90, the US Embassy warns buyers of the risks inherent in purchasing real estate in Honduras, citing the problems of fraudulent and lack of titles, weak and inefficient judicial system, squatting, and other property disputes.

Title problems are overblown, argues Ownbey, though he says that large lots should be bought through a company structure, which can be 100% foreign-owned. "Honduras has a registry system like the US. It gives you a certificate, and you get a certificate from the Municipal Office that no taxes are unpaid. You can get title insurance..." Ownbey added.

The crisis seemed to draw to a close when the newly elected president, Porfirio Lobo Sosa, of the right-wing National Party, was inaugurated on January 27, 2010, replacing Micheletti. The political situation was somewhat stabilized. President Lobo has announced attempts at reconciliation to pave the way for Honduras' readmission to Organization of American States (OAS).

Zelaya was allowed to return to Honduras last May 28, 2011 in an agreement between him and President Lobo that corruption charges against him would be dropped. Lobo also formed an international truth commission to look into events of 2009, and appointed a human rights adviser, moves intended to pave the way for Honduras' readmission to the OAS.

However the political situation seems to be deteriorating. Shortly after Zelaya's return, the truth commission ruled that his removal had been a coup, illegal, and not a constitutional succession as some opponents argued. However it also ruled that Zelaya's referendum on constitutional change had itself been illegal.

There has been an enormous escalation of human rights abuses, with more than 17 journalists killed during the past 2 years. Government officials have also been targeted, especially those linked to the fight against drug trafficking.

In November, President Porfirio Lobo sacked his top police commanders and deployed troops to combat crime, but the use of the military has itself been cricitized.

Despite all this, Honduras' economy bounced back in 2010 with 2.8% growth. With the increase of domestic demand and a more favorable outlook for the US, Honduras' largest trade partner, it is expected that the economy will grow by 3.7% in 2011, and 4% in 2012. The Honduran government was able to fulfill the conditions in 2010 under the $202 million stand-by arrangement with IMF. Policymaking is directed to fiscal reforms putting public finances back on a sustainable path.

Due to increasingly high workers' remittances, it is also expected that private consumption will rise during 2011 to 2012. Unemployment is expected to slightly drop by 4.3% this year as compared to 4.6% in 2010. This year, Honduras is expected to face supply-side inflationary pressures due to rising food and fuel prices, with inflation of around 7.8%.