What lessons can property investors learn from the last economic crisis?

The 2007–2009 global financial crisis was largely due to the towering household debt load and non-transparency of mortgage-based derivative securities. The investment strategy of pumping funds into a single asset – which had previously proved reliable – turned out to be rather risky. In order to be prepared for any crisis in the future, it’s important to avoid excessive debt load and make sure you have a financial safety cushion (hard cash) to fall back on.

Unstable loans and a cash shortage sparked the 2007–2010 crisis

The crisis was triggered by households losing the ability to pay debt. The markets of the US, Western Europe, and a number of developing countries – including Russia – were affected.

It all started with households being offered opportunities to obtain cheap and often unsecured residential property purchase loans, which in turn fueled consumption. People believed that they could afford bigger homes in better neighbourhoods. They didn’t pay enough attention to the growth of their incomes while doing so. Ray Dalio, founder of the Bridgewater Associates hedge fund, and one of the wealthiest investors on the planet, says human nature was at fault: “Consumption always grows faster than income.”

The growing demand for residential property also led to a price hike. The value of residential property eventually stopped increasing as a disparity between buyers’ paying capacity and prices emerged. Owing to this, sellers’ gains dropped. It became difficult for many households to pay their debts and, as a result, consumption started to decrease and an economic recession kicked in.

The number of jobs started to shrink, which aggravated the situation. Ultimately, many households completely lost the ability to repay debts, including mortgages – the crisis then entered an active phase.

The share of unsettled household debts started growing significantly from 2007. People struggled to repay increased debts, while in such cases banks can take properties back. The height of the crisis was in 2009. 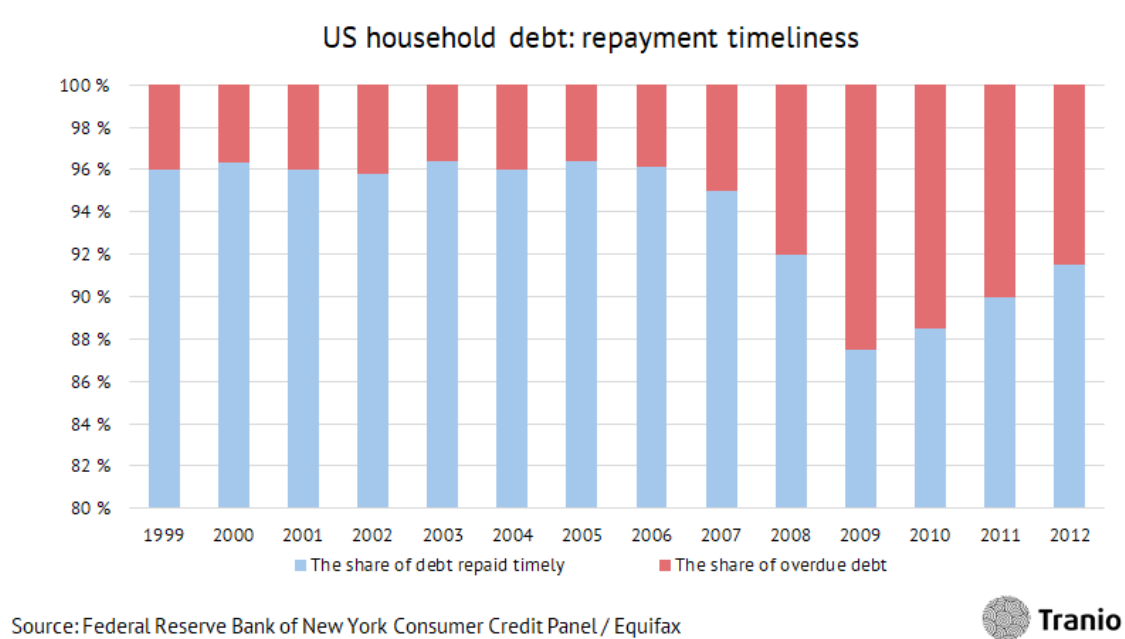 Collateralised property was also depreciating as the economic crisis raged, and it was becoming even more expensive and dangerous for capital to use loan funds.

The crisis spread when it turned out that many non-transparent investment vehicles had been issued around the globe: it was impossible to estimate the risks associated with such securities.

The stability of trillions of financial assets was based on mortgage repayments. When mortgages started collapsing, securities and banks were the next to fall.

Any households forward thinking enough to have saved a cash reserve would have certainly been in a better position. Cash is the most liquid asset there is – there’s always an opportunity to use it as quickly, including to cover loan expenses with no overpayment.

In 2007 and 2008, most people didn’t have a cash security cushion. This is illustrated by the fact that the number of new bank card loans increased sharply during that period. From 2008, the number of active bank credit card accounts began to decrease drastically: people couldn’t redeem new loans. What happened in the US is a good example of this.

Having spare cash during a crisis allows people to buy assets cheaply. It’s no coincidence that in 2019, the TIGER 21 investment group – including 750 investors with over $75B in assets – increased its cash capital shares to the highest level since 2013. Cash now amount to 12% of the group's investment portfolios. This was reported in August 2019 by the US financial magazine Barron's. The media outlet notes that the investors of TIGER 21 keep getting rid of stocks in favour of direct property investment, in anticipation of a future economic crisis.

Property prices fall when demand drops. Between 2007 and 2010, price gains were only observed in Sweden, Finland, and Germany. In the EU, the prices fell most sharply in 2009 (-8.8% according to Eurostat and OECD). At the time, the number of property owners in the red also spiked. 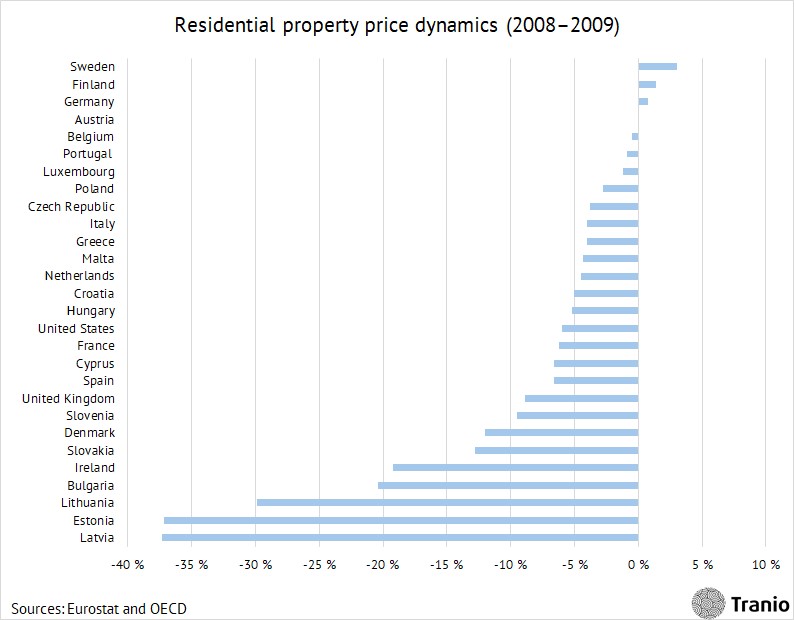 Residential property prices in the US fell by almost 20% during the crisis. Before that, between 2006 and 2007, the prices changed very little. This may be due to the stagnation of price change against demand. Demand had already started falling, but the sellers were still to reduce prices.

The European property market was not affected as much as the US, which became the epicentre of the 2007–2009 global financial crisis. The slide in European property prices started later and was shorter, while the prices recovered quicker.

Just as in the US, the price dynamics in the Eurozone show that during the crisis, the prices for retail, office, and industrial real estate fell more sharply than residential. In 2009, during the greatest decline, residential property prices reduced by 5% in comparison to 2008. For commercial property, the price decline amounted to 12%.

The similarity in property price dynamics in the US and European markets indicates that the prices for residential property are generally more stable than non-residential real estate, and it does not depend on the country.

Many investors managed to save their capital during the 2007–2009 crisis by investing in German property. Germany turned out to be one of the few European countries popular among investors with no price or economic bubble.

The existence of a price bubble increases the probability of a price decline in the case of an economic crisis. Spain, France, and the UK are the European countries that were unable to protect property investment, as a price bubble formed before the crisis took hold in each of them. During the crisis, property prices dropped in these countries.

Since 2015, a new residential property price surge has been observed in Spain, France, and the UK. This time the prices for German property have also started to grow actively. It means that Germany will lose its former advantage — the absence of a price bubble — in a potential future economic crisis. The likelihood is that, thanks to the strong economy, during a future crisis, German property prices will not drop as much as in other countries. 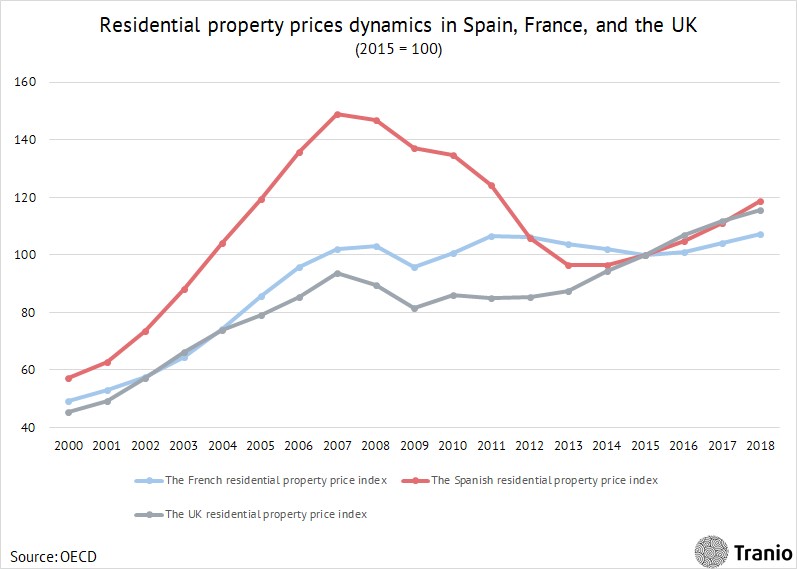 Of course, it’s a risky move for an investor to pump money into property in a country with an unstable economy. It’s necessary to analyse a country’s economy when investing in real estate, but it’s equally important to distribute the assets in the portfolio between different countries.

Tranio.com is an international real estate platform with a network of 700 partners worldwide and a catalogue of more than 70,000 listings in 57 countries. We publish daily news, high quality analysis on foreign realty, expert advice, and notes on laws and procedures related to buying and leasing properties abroad.