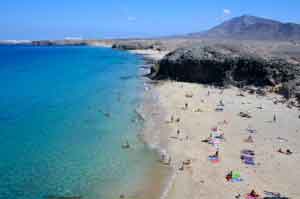 Lanzarote is a unique tourist destination, boasting surreal volcanic landscapes and breathtaking beaches.  Along with the other six Spanish owned islands in the Canaries chain it forms an archipelago that is sometimes referred to as the European Caribbean – as here sun starved holidaymakers from countries such as the UK and Germany can enjoy a beach break at any time of the year.  A factor that also makes the island a hot favourite with overseas investors, as owners of holiday villas and apartments on Lanzarote are able to enjoy a full twelve month rental season too.

The proximity of the Canaries to key markets such as the UK (which is just a four hour flight away), along with the ready availability of cheap flights from budget airlines such as Ryanair and easyJet makes Lanzarote both accessible and affordable to today’s traveller.  And despite the recession in Europe the island´s tourist industry has remained relatively buoyant as a result, with passenger arrivals pushing the 2 million mark in 2012 and further growth expected this year.

The UK is the key tourist market for Lanzarote, with British visitors accounting for around 45% of all passenger arrivals.  Now, thanks to the growing pace of recovery in Britain, consumers there are finding that they have more disposable income to spend on holidays abroad and this is translating itself into an increase in UK arrivals – with the number of tourist passengers climbing by 9% during September 2013 alone.

The resurgence of the Irish market is even more impressive, as Eire is still undergoing painful economic corrections as their austerity programme continues to bite.  Yet despite this the number of holidaymakers visiting Lanzarote from the Republic has soared again in 2013 – up by 21% (source Frontur Canarias) across the first nine months of this year.

Property prices on the island have fallen since the onset of the crisis and are now close to their 2002 levels, with the average price per square metre now standing at €1218.00 (source ISTAC, Canarian Institute of Statistics).  This is some way below price levels in other comparable sun spots such as the Balearics, yet rental yields are much higher thanks to the year round season,  making Lanzarote an attractive proposition for investors struggling to find returns on their capital from more traditional savings and investment options.

Mortgages are also cheap in Spain, as the European Central Bank has recently dropped the Eurozone interest rate too just 0.25% in order to stimulate growth.  As a result we are now seeing an increase in demand for good quality rental properties amongst both traditional markets such as the UK as well as newer groups of investors, such as the Russians.