New Zealand’s house prices are rising strongly again, as the impact of the ban on non-resident foreign homebuyers wanes. Median house prices surged 10.28% (inflation-adjusted) during 2019, a sharp turnaround from the prior year’s 0.1% decline. In a quarterly basis, real house prices increased 4.86% in Q4 2019. 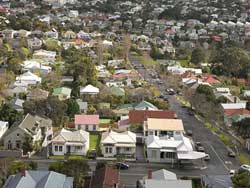 Nationwide, the number of days-on-market fell by four days to 31 days in December 2019 from a year ago, according to the REINZ.

The number of properties available for sale in New Zealand fell by 24.5% to 18,230 units in December 2019 from a year earlier – the lowest level of inventory since records began.

The Reserve Bank of New Zealand (RBNZ) recently decided to keep the Official Cash Rate (OCR) unchanged from the historic low of 1%, following two rate cuts last year (25 basis points in May 2019 and 50 basis points in August 2019). That’s because while employment is already near its maximum sustainable level, inflation remains below the central bank’s 2% target, said the RBNZ.