For a while now, analysts have been arguing there is a bubble in China’s property market. Using records from 35 major cities this column finds evidence of a housing bubble. It compares house prices to cointegrated fundamentals and finds that property in China is in general overvalued by around 20% – and even more so in the boom towns. 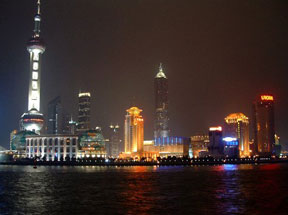 For many observers, the Chinese economy has been spurred by a bubble in the real-estate market, probably driven by the fiscal stimulus package and massive credit expansion (Nicolas 2009). For example, the stock of loans increased by more than 50% since the end of 2008.

In reaction to the global crisis, the government urged banks to increase lending (Cova et al. 2010). Mortgage loans have played a significant role, as they account for one third of total lending activities. Banks have provided easy credit for housing development, probably without sufficient evaluation of risks. In addition, state-owned enterprises have stimulated the development, having access to low-cost capital and believing they are too big to fail.

There are several indications that the market might have overheated in recent years. In some cities, buyers are picked up by the seller in a lottery. The rapid increase in house prices triggers exuberant expectations and speculation. Some real-estate developers have started hoarding houses by delaying their sales hoping for higher profits. Due to higher-price expectations, families are stretching to pay prices at the edge of their means or beyond.

To dampen the evolution, the People’s Bank of China has increased its nominal interest rate. The Chinese government has also introduced measures to combat record prices, including mortgage rates and down-payment requirements for second homes. In some cities, house owners are restricted in new house purchases. Many state-run mortgage lenders have cut mortgage discounts. Additional taxes on property are in the pipeline. While housing prices in the first-tier cities stopped rising further, they are still at record levels. Housing prices are not only a problem from an economic perspective, they’re also an issue of the people’s livelihood that can affect social stability. Households with average income increasingly feel that they cannot afford to buy a house (Deng et al. 2009).

A burst of a house-price bubble can be harmful for the real economy. Due to the low leverage, the risk that people are not able to fund their mortgage commitment might not be very high. However, housing investment accounts for 10% of GDP, and is crucial for economic growth. Because of the integration of China into the world economy, a bursting bubble can cause negative spillovers to other countries, particularly in the Asian region. The challenge for the government is to scrap out speculative activities without  killing an engine of GDP growth.

While accelerating house prices may indicate the presence of a bubble, its existence is rather controversial. Urbanisation trends, rising incomes, and low interest rates may all have triggered the rising prices. The ongoing trend for smaller families may have created strong demand. For many Chinese, especially for young couples, renting an apartment is not very popular. The regulation system does not give tenants much protection. Renters will lose their apartments if the home owner decides they want the building for a different use. Due to fast economic growth, millions of Chinese join the middle class each year, thereby contributing to high housing demand. Because of high saving rates, many households are able to buy a house with cash and are rather independent on mortgage loans. In addition, the uneven development across the regions has enhanced the housing demand in first-tier cities where there are better living conditions, more job opportunities, and better public resources. Overall, high house prices may be in line with the fundamental socioeconomic factors (World Bank 2010).

New evidence on the bubble’s size

In recent research (Dreger and Zhang 2010), we use a dataset for 35 major cities to estimate the size of the bubble relative to the equilibrium level implied by the panel cointegrating relationship. We suggest that positive deviations from the long run might indicate the presence of speculative bubbles. However, many analysts have argued that a bubble has emerged only in recent years, probably spurred by the recent fiscal stimulus package (Wu et al. 2010). Hence, the evidence can be misleading if the cointegration relationship is considered over the entire period. In a first step, we estimate the long-run relationship only up to some point in time. The fundamentals include real per-capita income, real interest rates, real land prices and population. Cointegration between these variables and the real house price can be established. City fixed effects are embedded to control for unobserved heterogeneity.

In the second step, the house price evolution is predicted over the rest of the sample, i.e. the last two years, where perfect foresight is assumed with respect to the fundamentals. This gives an estimate of the fundamental development of house prices, and the size of the bubble can be addressed. As an exception, land prices are held constant throughout the forecasting horizon to reduce endogeneity problems.

Our results indicate the presence of a house-price bubble. In Figure 1it can be seen that increasing imbalances have emerged over the past two years. For example, real house prices in Shanghai have been 28% above the long run equilibrium in 2008, and 35% in 2009. While the evidence is similar for Beijing, the increase is more spectacular in Shenzhen. Compared to the cointegrating relation, real house prices are overvalued by 66% in 2009, after 23% in 2008. In general, the bubble is more pronounced in the special economic zones and the south-eastern coastal regions. Overall, the size of the bubble is 20% in 2008 and 25% in 2009, regardless of whether GDP or population weights are applied. 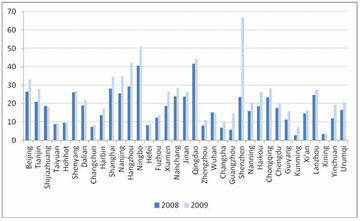 Note: Size of the bubble expressed in% of the fundamental value implied by the cointegrating relationship.

Further analysis indicates that changes in real house prices cause inflation, but not vice versa. In contrast, there is no causality from house prices to GDP growth. Therefore, a decline in house prices may contribute to a lower inflationary environment without huge negative effects on real economic development.

Read the original column at: VoxEU.org