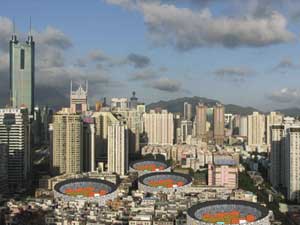 China’s average house prices rose by 0.5% over the month of August, data from the National Bureau of Statistics said.

This would be the third consecutive month that average house prices have risen. In July a 0.13% increase was noted and a 0.02% in June.

Average prices of new homes in 36 out of 70 medium to large cities surveyed for the month recorded increases in August. This is lower than that in July, which recorded 50 cities with record price jumps.

The China Index Academy data showing a 0.24% growth in new house prices in 100 major cities from July to August.

Reports by the state-owned Xinhua News Agency indicated that home prices will be kept low as cooling measures are in place.

“With the government working to boost supplies and market demand becoming more modest after a buying spree that has lasted since March, property prices will remain stable in September and October, the traditional peak season for home sales in China,” said Gu Yunchang, deputy head of the China Real Estate and Housing Research Association.

Mr. Gu further explained that currently there is still persisting buyers fatigue and the cooling measures still in place to keep prices at bay.

The State Council announced that investigative teams will be sent out later this week to check on these property sweeteners to encourage buyers in spite the restrictions.

Local authorities in Beijing, Shanghai, Tianjin, Hebei, Chongqing, Zhejiang, Fujian and Jiangsu are to cooperate in the said investigation.

This Council, the highest policy-making body in China, has been convinced that some property measures put in place to burst the market speculations had been eased due to the added pressure on city coffers compromising project budgets.