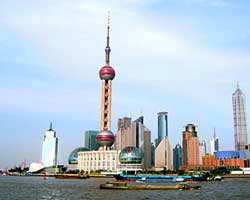 The cities of Beijing and Shanghai recently sold two pieces of
property that has been estimated to be more than $4 billion in total
cost. To build their coffers, city and provincial governments are taking
advantage of the private property firms’ recent aggressive buying to
prop up their land holdings. Shanghai has sold its highest priced parcel of land for 36,000 yuan
square metre, amounting to an estimated 2.77 billion yuan or $445
million. Beijing, on the other hand, recorded a record deal valued at 33,800
yuan per square metre, estimated to worth a total of 2 billion or $400
million. Chen Guoqiang, vice-director of China Real Estate Society, told China
Daily News that the real estate sold are located strategically, thus
are reflected on their prices. He said the city governments of Beijing and Shanghai and other
municipalities of Guangzhou, Tianjin, Chongqing, Chengdu, Wuhan,
Changchun,Nanjing and Hangzhou  are playing catch up because during
the first semester, there was a slowdown in the release of government
land due to the transition in the Communist Party leadership. Centaline, a national house brokerage and state-run research group,
said in a report that so far these local governments have made the
highest transfer of real estate to a private owner in a week’s time,
with an estimated total of 653 hectares. The country’s top real estate firms led by China Vanke Co. Ltd. have
taken advantage of low land prices and have broaden their land banks
with about $1.34 billion (8.87 billion yuan) in first- and second-tier
cities at the onset of the fourth quarter, official data from local
governments showed. China’s biggest developer in terms of market value, China Vanke said
in a disclosure to the Hong Kong Stock Exchange that it has acquired
parcels of land worth 4.67 billion yuan in Guangzhou and Hefei during
the first week of September. The company said it made a similar land
acquisition in August worth 1 billion. HK’s Centaline Research Department Head Zhang Dawei told China Daily
News that property firms are in the right position to increase their
land holdings with the regime of low prices and a more positive
outlook on the market as sales have so far risen. Home sales and prices
Residential and commercial property sales jumped 5.6% year-on-year
amounting to 4.630 trillion yuan ($742.2 billion) from January to
October this year, data from the National Bureau of Statistics showed. During the period of nine months, January to September, sales of
residential and commercial property rose 2.7% to 4.035 trillion yuan. China’s property market have so far hit bottom and recently home
prices have risen in October amidst the government pressure to keep
the property industry in check. Out of China’s 70 cities, home prices in 35 cities have risen in
October compared to the 31 cities recorded in September—the first jump
since the month of July. China Bureau of Statistics said in a statement that home prices in 18
cities remain unchanged all this time. With new leaders in place after the Communist Party’s convention, some
changes are expected but still within the boundaries of controlling
property prices, high instalment rates, and higher tax rates in first
and second-tiered cities. Sources: China Bureau of Statistics, China Daily News, HK Stock Exchange