Analysis: Elasticity of arrears in Australia 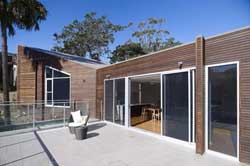 The debate relating to housing prices seems to be a constant pre-occupation of many in the marketplace, both here and abroad. The term bubble is often used to describe the current Australian condition.

Our belief is that focussing on the underlying property prices does not deliver an understanding of the Australian environment; rather we believe that the focus needs to be on the asset that underpins the system, in the case of most financial systems, this is the strength of the loan.

Maintenance of loans swallows up a good portion of disposable income in this country; this has been a function of a number of factors including the large absolute prices paid for dwellings as well as mortgage interest rates which are at present high by western standards.

What this highlights is the fundamental importance of paid employment to the household cash flow statement. As such the unemployment rate and interest rates are the two key drivers of arrears, and ultimately house prices.

Rather we believe that the positive structural factors relating to recourse laws, lending standards and our more muted supply side response to higher prices act to impact the elasticity of arrears.

In effect these factors act to buffer the loans and the underlying collateral against rising stress. These series of firewalls need to be breached before the collateral is heavily impacted.

The other factor that contributes to the resilience in arrears relates to the natural buffer provided by the underlying economy, the ability for the RBA to significantly reduce rates, combined with a government balance sheet which retains the headroom to provide meaningful fiscal stimulus is there to help if required.

The process of debt transfer from household to government to tax payer has been seen on a number of occasions overseas now, and was perhaps the key driver behind Moody’s most recently raising a concern around the Australian sovereign credit rating on the grounds that the household sector remains heavily leveraged.

In essence this illustrates that ultimately housing foreclosures and bank failures are the governments’ problem.

Ultimately every economy has its tipping point and its Achilles heel, here in Australia we cannot escape the volatility that is implicit in the type of economy we have become, we are now strongly tied to Asian industrial demand, and this concentration of risk makes us vulnerable.

A hard Chinese landing would almost certainly ensure a negative outcome for our terms of trade and would in all likelihood impact business investment quite significantly.

This would of course be offset by the aforementioned buffers, the question would ultimately be if the downturn that would result from a strong deterioration in our terms of trade would be sufficient enough to break through the structural buffers as well as a rate reduction and fiscal support.

Ultimately for a “bubble” to burst, the market must come to a point of total capitulation, where firewalls have been breached and the collateral alone is left to protect the bondholder or bank from loss.

Here in Australia the average LVR for homeowners (non-investment) sits below 50% according to the last ABS survey. However, the experiences overseas have shown us that this figure deteriorates as interest recapitalises and values drop in a broken market.

For the financier there is short window of opportunity to foreclose and sell stock in an attempt to protect against losses.

This process leads to the last phase of such a crisis, that of forced forbearance. This occurs once the collateral is compromised and there is little to no incentive to foreclose.

The size and scale of forbearance limits household deleveraging and essentially freeze frames the environment, the higher the forbearance the longer and more drawn out the recovery.

One does not need to look further than Ireland and Spain to see how not recognizing these losses in the system simply acts to prolong the trough, that said the alternative of sacrificing a good portion of the middle class (as occurred in the US) is a difficult sell at the best of times.

Here in Australia the relatively muted supply side response during the period of property price strength is more reflective of the UK and Dutch experience than that of the US, Ireland or Spain, meaning that the expectation would be that the collateral exhibits superior resilience, directly limiting loan losses.

The magic number would in all likelihood be best reflected by that of unemployment. Where that number needs to be to bring about increased correlation is hard to point to definitively. In all likelihood a figure closer to 8% in unemployment would be very likely to put significant pressure on the marketplace.  This fact explains the RBA’s concern with the figure.

The Australian story needs to be looked at in its entirety to form a view, looking at individual pieces of information in isolation provides an incomplete view.

Ultimately we believe that the Australian economy is likely to exhibit greater resilience than many of the offshore Aussie bears are betting due to the aforementioned firewalls. Australia is extremely well placed to face a shorter period of economic weakness, which is as much as you could ask for from any market economy. Beyond that our fate will be decided by the global market.