Moldova’s property market at a standstill

During the year to end-June 2013, residential property prices in Moldova were unchanged from a year earlier, at an average of €650 per square meter (sq. m.), based on figures released by Nika Imobil real estate agency. When adjusted for inflation, property prices actually dropped by 1.3% over the same period.

On a quarterly basis, residential property prices remained unchanged (dropped by 1.08% in real terms) in June 2013.

Moldova's housing market, especially those in Chisinau and surrounding areas, saw tremendous growth in the early-2000s, boosted by the renovations and completions of unfinished buildings after the fall of the Soviet Union. Moldova saw a house price explosion partly due to increased demand from foreign investors and higher remittances from Gastarbeiters (foreign workers in Germany) combined with lack of supply.

Before the global financial crisis of 2008, residential real estate prices in Moldova had risen annually by 30 to 40% from 2002 to 2007, according to Lara Real Estate Agency. In January 2003, the average price of both newly built and used blocks of flats ranged from US$270 to US$330 per sq. m. During the year to June 2008, residential property prices skyrocketed by 41.3% (38.2% in real terms) y-o-y to an average of €900 per sq. m., according Nika Imobil. Housing construction increased sharply over the period.

Moreover, property sales transactions in Moldova quintupled from 17,907 in 1999 to 89,451 in 2005, based on a report published by the World Bank. In addition, the total number of registered mortgages skyrocketed by 12 times over the same period.

The property market started to feel the pinch of the global crisis in 2008. Based on figures released by Nika Imobil:

Transactions have also declined sharply, as sellers do not want to sell their property with zero-profit while buyers delay purchasing, hoping for further price declines. The volume of new construction has also fallen by about 40% over the period, in response to huge oversupply.

In 2013 things started to stabilize, though transactions remain far below the pre-crisis levels. The average price of houses in the secondary market is currently about €500 to €800 per square metre (sq. m.), according to Incasso Companie De Colectare A Datoriilor. On the other hand, the average price of houses in the primary market ranges from €400 to €1,000 per sq. m. Land prices intended for housing construction range from €7,000 to €50,000 per 0.01 hectare (ha.).

As the country turns to the west, more properties are being quoted in euros instead of US dollars which is the norm in Russia. Moldova's government seeks closer European ties and aspires to become a member of the European Union (EU).

Chisinau is the country's political, economic, and cultural capital. It is the only city in Moldova with reasonable living conditions for expatriates. Many houses are built specially for rental. The city's prime residential area is in its western section: Buiucani, the City Centre, and Botanica.

There are no restrictions on foreigners buying properties in Moldova, except for agricultural lands and lands of forest fund.

Buying prices in Chisinau have not moved much since last year, and remain at around 1,000 Euros per square metre (sq. m.). We are surprised by the stability of both prices and rents (all our figures are in Euro terms, making comparison with other European cities possible).

Yields in Chisinau continue to be excellent.

Rents remain at around 10 Euros per square metre. Very small apartments of 40 sq. m. have excellent rental yields, at 13%, while medium-sized apartments have yields of around 11%.

Rental Income: Gross rental income is taxed at 10%, withheld by the tenant.

Inheritance: There are no inheritance taxes in Moldova.

Residents: Residents are taxed on their worldwide income, at progressive rates from 7% to 18%.

The maximum cost of registering property is only 2.30% of the property's value. However, the 20% VAT on property purchase significantly increases transaction costs. The process takes about 4 to 10 days for the five procedures, according to the World Bank. Note that transactions are done in cash. 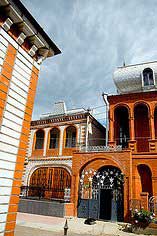 Tenant Security: Contracts are automatically terminated upon the expiration of the fixed term.

There are no special tribunals for resolving landlord tenant disputes. On average such disputes are settled in six months' time.

A poor country with secessionist problems

Moldova is the second smallest country to emerge from the former USSR; with a population of 3.56 million in 2013. It is one of the poorest countries in Europe with a GDP per capita of US$2,214 in 2013, and is heavily indebted. More than a decade after independence from the USSR, its economy and history have been on a rollercoaster ride.

It is one of the former Soviet Union’s most densely populated countries, with 127 inhabitants per square kilometer. To address the huge demand for housing, the government built around 2,300 apartments in the past recent years. They are planning to build seven thousand more units.

Only 34% of the population is employed and more than a third of the economy is agricultural. Over 75% of the population lives below the poverty line; by far the greater portion of the houses in Chisinau, for example, lack central hot water.

The country lacks natural resources and relies on imports of fuel and raw materials. The government is ridden with corruption and bureaucratic red tape. A remarkable portion of the population works overseas, about 25% of working age Moldovans, and they send back much needed foreign currency. Remittances make up about 21% of the country’s GDP.

The average annual GDP growth rate from 2001 to 2005 was 7.08% per annum, based on figures released by the International Monetary Fund (IMF). Although economic growth slowed to 5% in 2006 and 3% in 2007, these were still remarkable growth rates, compared to economic decline experienced for the entire 1990s, after independence.

Real GDP per capita is back to its pre-independence level, after falling by 40% from 1992 to 1999. Then in 2008, Moldova’s economy expanded by a spectacular 7.8%. However in 2009, GDP contracting by 6% due to the adverse impact of the global economic and financial crisis.

Separatism is a worry

The country’s major political predicament is the strength of the pro-Russian Slavic secessionist forces in the Eastern region of Transnistria, who want autonomy from mainland (Romanian) Moldova, and wish to be annexed by Russia.

The separatists have their own government, their own currency, media, army and police force, although Transnistria is not yet internationally recognized. The southern region of Gagauz also wants autonomy. It is inhabited by Christian Turks who fear “Romanization” by the centre, and even possible union with Romania.

A bloody civil war was fought against the Transnistrian forces in 1992. A three way peacekeeping force (Russian-Transnistrian-Moldovan) facilitated a fragile peace accord between the two factions. Autonomous territories were established in Transnistria and Gagauz by the 1994 constitution, and no armed conflict has occurred since, but relations between the central government and Transnistria remain volatile.