Almost impossible to evict tenants in the Netherlands

Dutch law is PRO-TENANT. The most dangerous aspect for the landlord is that once a property has been rented, tenants are almost impossible to evict.

Rents: Can landlord and tenant freely agree rents in Netherlands?

The rent paid can be freely agreed between landlord and tenant, for properties above the 'liberalization rent limit' of €604.72 per month. Properties below this limit are subject to rent control under the Residential Tenancies (Rent) 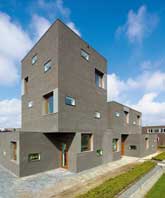 Act 1979, by which according to a 'residential accommodation points system (points matrix), features such as floor area, position, quality, and facilities earn points. A maximum rent is chargeable for a total number of points. Rent tribunals oversee situations of rent disputes, and have the power to reduce rents.

A landlord may increase the rent of his housing once a year, but the government sets the maximum percentage of increase. The maximum allowable rent increase from July 1, 2007 to June 30, 2008 is 1.1%, equivalent to the inflation in 2006.

For homes with rents above the liberalization level limit of €604.72, the Residential Tenancies (Rent) Act is largely not applicable. Landlords of these homes may only put up the rent once a year, but there are no rules about by how much.

What rights do landlords and tenants have in Netherlands, especially as to duration of contract, and eviction?

Under Dutch law there are no temporary tenancy agreements; the basic rental contract is one of unlimited duration, with a minimum term of one year. Agreements entered into for a limited time period will (after the first period has elapsed) be converted into agreements for unlimited periods.

Landlords can only give notice in strictly defined cases, and it is extremely difficult for owners to evict tenants once they are established. Only the judiciary, and not the landlord, can terminate the contract, and only after the landlord has given notice of from three to six months. Where the contract is for a fixed period of time, he is restrained from giving notice except towards the end of that period.

Limited arrears in payment of rent are in general insufficient grounds for a rescission of the contract; only an order for payment can be achieved. In the case of arrears of up to three months, rescission will be denied. Nuisances committed by tenants tend not to be a good basis for eviction; they tend to be denied by tenants, and the court procedure is costly.

Contracts are largely standard, and deviations from these standards tend to be rejected by the courts.

Landlords may insert clauses forbidding sub-letting in the contract.

How effective is the Dutch legal system?

On August 1 2003, there was a complete restructuring of the general rules of tenancy in the Dutch Civil Code.