But there are wide price variations in terms of location and property type.

Residential construction is recovering. In the first eleven months of 2021, authorized housing starts rose by 5.1% y-o-y to 788,091 units, following four consecutive years of y-o-y declines, according to the MLIT.

Demand is expected to continue increasing this year, as the country remains an attractive investment destination for ultra-rich Asians.

“Japan is a safe haven for wealthy individuals in Asia,” said Mori Nishimura of Housing Japan. “Nowhere else in Asia can you buy freehold land as a foreigner.” Most foreign buyers in the country come from Singapore, Malaysia, Thailand, Hong Kong, and Mainland China. There is also a growing interest from the US, Australia, Western Europe, Taiwan and Indonesia.

This is supported by a 2021 report released by Savills: “Whilst the global pandemic and the subsequent recession have thrown the real estate market into turmoil, the Japanese residential market on the other hand, known for its defensive nature, has been gaining strong interest from global investors, especially in Tokyo.”

“The attractiveness of the market is based on favourable funding conditions, as well as its stable political and economic fundamentals. These factors have stood out especially in recent years as social disruptions, including COVID-19, were experienced around the globe. As the world economy remains clouded by uncertainty, and abundant liquidity seeks investment opportunities, the Japanese residential market will likely continue to gain traction.”

Japan's reasonable rental return is another attraction. Gross rental yields - the rental return earned on the purchase price of a residential property - range from 3.4% to 5.4% in Tokyo's central districts, according to Global Property Guide research.

Yields on the very smallest apartments are 5.42%, a reasonable yield.

“Some international investors are looking for rental yields and to diversify their holdings outside their home countries, while others just want to have a holiday home in Japan,” said Robert Crane of Solid Real Estate.

There are no legal restrictions on foreigners owning real estate property in Japan.

After shrinking by a record 4.5% in FY 2020 due to the COVID-19 pandemic, the Japanese economy began to pick up last year as vaccinations progressed and economic restrictions were lifted. The world's third biggest economy grew by about 2.6% last year.

The economy is expected to continue growing this year, with the government projecting a real GDP growth of 3.2%. Yet uncertainty remains, as the highly contagious Omicron variant of coronavirus, coupled with semiconductor chip shortages and rising energy prices, could dampen economic activity.

In Tokyo's central districts gross rental yields - the return earned on the purchase price of a rental property, before taxation, vacancy costs, and other costs - range from 3.4% to 5.4%. They’re a little higher on smaller apartments. Not great, though not untypical for a city like Tokyo. Yields on the very smallest apartments are 5.4%, a reasonable yield. But then smaller apartments tend to need more maintenance, so a higher yield is justified.

Prices per square metre range from around $8,700 to $13,800, not really so expensive when compared to other global cities. In Yen terms residential prices continue to strengthen. That’s likely to continue so long as Abenomics is in place. More money in the system means lower interest rates means increasing asset prices, especially prices of assets that produce nice incomes, like Tokyo property.

This is going to be interesting. If Abenomics really leads to a revival of the Japanese economy, rising incomes will continue to support rising rents. However as time goes on, the success of Abenomics seems more and more in doubt.

However, effective rental income tax is low, ranging from 3.4% to 5.9%. Nonresident taxpayers are taxed on their net income; depreciation and income-generating expenses such as maintenance and repairs are deductible from the gross rent.

Inheritance: Inheritance is based on residency status but foreign individuals inheriting property located in Japan are still subject to inheritance tax, which is levied at progressive rates.

Residents: A permanent resident taxed on his worldwide income at progressive rates, from 5% to 45%. 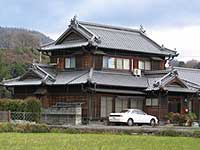 Rents: Rents are freely negotiable. Aside from two to three month’s security deposit, landlords receive key money worth one to two month’s rent.

Tenant Eviction: Automatic renewals of leases were abolished in 2000, making eviction easier. If the tenant prematurely ends the contract the landlord can charge one month’s rent.

After shrinking by a record 4.5% in FY 2020 due to the COVID-19 pandemic, the Japanese economy began to pick up last year as vaccinations progressed and economic restrictions were lifted. The world’s third biggest economy grew by about 2.6% last year.

The economy is expected to continue growing this year, with the government projecting a real GDP growth of 3.2%. Yet uncertainty remains, as the recently spreading Omicron variant could dampen private spending, which accounts for more than half of Japan’s GDP.

Recently, the government introduced its so-called “vaccine and test package”, which aims to strike a balance between anti-coronavirus measures and economic activity. Under the said program, vaccinated people or those with negative tests would not be discouraged from traveling across prefectural borders and would be allowed to buy alcohol from restaurants even during states of emergency. The expansion of vaccination to children, and the introduction of oral COVID-19 drugs developed by Pfizer Inc. and Merck & Co. are also expected to boost economic activity in the country.

“For 2022, the main goal for the Japanese economy would be achieving a ‘with-corona’ new normal, striking a balance between keeping the economy running and curbing infections,” said senior economist Saisuke Sakai of Mizuho Research and Technologies.

But even before the pandemic, the Japanese economy had been adversely affected by the US-China trade tension and the introduction of a consumption tax hike from 8% to 10% in 2019.

In fact some say that Japan has never fully recovered from the great bubble of the late 1980s. However Japan’s economic performance is sometimes over-criticized, the truth being that over the past decade Japanese growth has been at par with, or better than, Europe’s older economies, especially in GDP per capita terms.

Recently, the government approved a JPY 107.6 trillion (US$940 billion) draft budget for FY 2022 starting in April – a record high for the tenth consecutive year in a row – to finance measures against the coronavirus, swelling social security costs and record defence spending.

In November 2021, the overall jobless rate was 2.8%, the first increase in six months, according to the Ministry of Internal Affairs and Communications. Though it is still slightly lower than the average unemployment rate of 2.9% from 2014 to 2020.

Nationwide inflation rose to 0.6% in November 2021, the third consecutive month of increase and the highest in nearly two years, mainly driven by rising energy and water charges. Yet it remains far below the BOJ’s official inflation target of 2%.

Persistently low inflation has been a long-standing problem of Japan, with inflation standing at an average of just 0.4% from 2015 to 2020.

Weak yen benefits exporters but hits consumers hard
One aspect of Abenomics was an attempt to boost the economy by reducing the Yen’s exchange rate. The Japanese yen was made to depreciate by almost 37% from US$1 = JPY 78 in 2012 to US$ = JPY 123 in 2015. After regaining 4.7% of its value in 2016-17, the yen has stabilized in the next three years. In 2020, the yen appreciated again against the US dollar by about 5.1% from a year earlier.

While a weak yen normally benefits exporters, it may be hurting Japanese households now more than in the past, as the country’s increasing reliance on more expensive raw material imports pushes up the cost of living in the country, said BOJ Governor Haruhiko Kuroda.

The depreciation of the yen will likely continue over the coming years, as it becomes increasingly less attractive to foreign investors. While the BOJ is expected to continue its large-scale monetary easing, the United States and some European countries have recently announced their policy of scaling back monetary easing and raising interest rates. This will prompt investors to buy these currencies with higher interest rates, instead of the yen whose interest rate remains extremely low.

Where to buy property in Japan