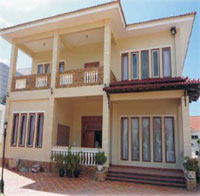 Cambodia’s property market is still somewhat depressed. However, the new foreign ownership law is undoubtedly helping the property market recover.
The number of property transactions increased threefold in 2010 thanks to the new law, according to Sung Bonna, President of National Valuers Association of Cambodia (NVAC).

Foreigners are now allowed to own apartments and condominium units, but not land, and therefore not the first floor of buildings, under the new foreign ownership law approved by King Norodom Sihamoni in May 2010.  In 2010, tax revenues from property-related transactions soared 60% to KHR76.21 billion (US$19.5 million), from KHR47.7 billion (US$12.2 million) in 2009. This is still far below the level of transactions seen in 2007 and 2008 - but it is a real recovery.

“We have already sold 80% of our project, and 60% is foreign-owned,” said Un Mouy of Two Town Co., the developer of Bal Resort. ’Thanks to the new law our project sales are better and better.’

The Camko City megaproject is also benefitting. “We have sold better since the National Assembly approved the foreign ownership law, and we strongly hope that we will get more and more foreigners to buy our condos this year (2011),” said Kheng Ser of World City, the developer of Camko City. About 70% of Cambodia’s upper-end real estate market relies on foreign investors.

In 2005, the Cambodian government had amended the investment law to allow foreign ownership of buildings. However, the law was never implemented and the idea floundered, since the country was then experiencing one of Asia’s biggest property booms.

Land ownership is against the Constitution and is still out of the question.. However land can be held by foreigners on long (renewable) leases, and through majority locally-owned companies incorporated in Cambodia. These structures are argued by lawyers in Cambodia to be safer than legal schemes in any other South East Asian country in which foreign land ownership is formally prohibited.

Due to the crisis, Cambodia’s biggest residential developments have been badly hit:

In 2010, there were a total of 2,149 construction projects approved, down by 3.6% from 2,230 approved projects in 2009, according to the Ministry of Land Management, Urban Planning and Construction.

House prices dropped by around 10% in 2010, according to Seng Sopheak of CPL Cambodia Properties Ltd.

The boom before the bust

Cambodia’s housing market enjoyed unprecedented price rises from 2004 to 2007, with property prices rising by about 25% to 40% annually. Land price increases were at first confined to Phnom Penh, Siem Reap and Sihanoukville, but the boom spread right across Cambodia. Other hot spots were the border areas with Vietnam and Thailand and, to a lesser extent, Laos.

Cambodia also experienced a construction boom, particularly in Phnom Penh, fuelled by foreign investment. The government is aggressively pro-development, and squatters and other eyesores are simply cleared away, by a government which is in league with wealthy developers.

A downturn started in July 2007 after the government announced new investment guidelines for developers.

Then in mid-2008, the bubble burst. The global economic and financial crisis had adversely affected South Korea, the country’s biggest investor. As a result, South Korean investors either pulled their investments or delayed their projects in the country.

Investments in real estate developments in the country have continuously dropped from US$3.19 billion in 2008, to US$1.99 billion in 2009, and finally to just US$840 million in 2010, according to the Ministry of Land Management, Urban Planning and Construction.

In the second quarter of 2010, average monthly rents across all grades fell by up to 25% q-o-q, according to Keuk Narin of Bonna Realty Group.

Rents for residential apartments are expected to continue to drop in 2011 due to weak demand and increased supply of apartments, according to local real estate experts.

Small-scale luxury apartments, which are usually between four and six-storey buildings, are widespread across Phnom Penh, particularly in Keng Kang 1 and Toul Kork. Some of the most popular apartments in the capital are the Pasteur Villa, City Palace Apartments and Grand Residence.

Cambodia’s mortgage market is still very small. Mortgages and housing loans were introduced to the real estate sector only in 2008. The total amount of outstanding mortgage loans was KHR455.3 billion (US$116.5 million) in November 2010, or only 1% of GDP, according to the central bank, the National Bank of Cambodia (NBC).

Nevertheless the banking sector could face serious risks during the next two years if the collapse of property prices continues, the Economist Intelligence Unit (EIU) has warned.

From January to November 2010, the average interest rate on loans denominated in US dollars was 16.3%, according to the NBC. The Riel loan rate was far higher, averaging 22.8%.

The Cambodian economy is heavily dollarized; the Riel (KHR) and the US dollar (USD) can be used interchangeably. However, the government has a long-term goal of reducing its reliance on the greenback, which accounts for more than 90% of all currency in circulation, according to the Asian Development Bank (ADB).

Cambodia is still dependent on foreign assistance, which accounts for about half of the government’s budget.

What next for Cambodia’s real estate market?  “The market has already hit the bottom – it will stabilize this year,” said NVAC President Sung Bonna. “I hope that it will start to increase again for the next two years, but it is not likely to be a boom like in 2007 and mid-2008.”