Despite the pandemic, Estonia remains healthy

After a decade-long of uninterrupted house price rises, Estonia's housing market remains fundamentally healthy, despite the economic repercussions of the Covid-19 pandemic, the worldwide surge in inflation, and the ongoing invasion of Russia of Ukraine.

Demand remains robust. During 2021, the total number of purchase-sale contracts of dwellings in Estonia rose by a huge 21%, following annual increases of 2.8% in 2020, 5.6% in 2019 and 5.5% in 2018, according to the Estonian Land Board. It was the highest number of sales since 2006. In the first five months of 2022, purchase-sale contracts were down by 16.2% from a year earlier but remain one of the highest sales numbers ever recorded.

Yet residential construction activity is falling. In Q1 2022, dwelling completions fell by 27.1% from a year earlier, following a decline of 11.1% in 2021, based on figures from Statistics Estonia.

The outlook for Estonian housing market in 2022 remains positive, but Russia's invasion of Ukraine poses a wider threat to the Baltics and perhaps specially to Estonia.

“The prospects of the real estate market seemed especially good for 2022 since all the fundamental factors that promote the market remained relevant up to the beginning of 2022,” said Ober Haus. “However, the Russian invasion of Ukraine in February 2022, has caused a global geopolitical and economic crisis. The ongoing war threatens, to a greater or lesser extent, economic development globally. And the Baltic countries, due to their geographical position, cannot but be affected by these events.”

Estonia's economy grew strongly by 8.3% in 2021 from a year earlier, a strong recovery from a 3% contraction seen in 2020, according to preliminary data released by Statistics Estonia. Compared to 2019, the economy grew by 5.2%, thereby exceeding pre-pandemic levels. However, economic growth is expected to slow, with the European Commission projecting GDP growth for Estonia of just 1% in 2022, amidst the Ukraine crisis.

Foreign individuals and companies are allowed to acquire real estate with the permission of the local authorities. There are legal restrictions on acquiring agricultural and woodland of 10 hectares or more, and permission from the county governor is needed. Foreign individuals are not allowed to acquire land located in smaller islands, or listed territories adjacent to the Russian border.

Gross rental yields in Talinn, Estonia - the return earned on the purchase price of a rental property, before taxation, vacancy costs, and other costs - are quite attractive, significantly higher than they were a few years so (our research suggests that they have risen over the past year). Gross rental yields are an important consideration even for those who do not intend to become landlords, because a high rental yield indicates that the property market is reasonably priced.

Gross rental yields on apartments range from 6.4% to 7.7%, except in the upscale Vanalinn. Smaller apartments tend to earn higher rental returns.  These rising yields are despite the fact that house prices in Talinn continue to rise.  They remain however very reasonable at between EUR 1,650 to EUR 2,200 per square metre (sq. m.) or EUR 144 to 205 per square foot.

Round-trip transaction costs on residential property in Tallinn are low.

Taxes are high in Estonia

Rental Income: Nonresident individuals are liable to pay 21% withholding tax on their gross income. No deductions and personal allowances are given. Withholding taxes are final taxes, so the non-resident has no obligation to file tax returns.

Capital Gains: Capital gains from the sale of immovable property are aggregated with other income and taxed also at 21%.

Inheritance: There are no inheritance taxes in Estonia.

Residents: Residents are taxed on their worldwide income at a flat rate of 21%.

The previously announced income tax rate reductions have been cancelled.

Total transaction costs are between 2.57% and 5.59%. The main cost is the realtor’s fee, which varies between 2% to 4% depending on the size of the apartment. All costs are paid by the buyer. 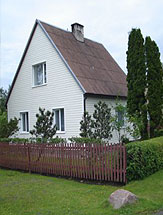 Rents: ‘Luxury’ housing category is free from rent control. Other housing is subject to a prohibition on “excessive rents” (Law of Obligations S301). The landlord can ask for up to three months’ deposit.

Estonia’s economy grew strongly by 8.3% in 2021 from a year earlier, a strong recovery from a 3% contraction seen in 2020, according to preliminary data released by Statistics Estonia. In fact compared to 2019, the economy grew by 5.2%, thereby exceeding pre-pandemic levels.

“The growth was driven by manufacturing which climbed back to the pre-pandemic level. The economy was also boosted by information and communication, transportation and storage, and professional, scientific and technical activities. Accommodation and food service activities, which have been ravaged by the coronavirus crisis, continued to grow at a very rapid rate,” said Statistics Estonia. “The main activities that hampered economic growth were trade and agriculture due to price increases in these sectors. The energy sector remained at the same level year on year despite the increase in prices.”

However, the outlook is now uncertain amidst the ongoing Ukraine crisis. Recently, the European Commission slashed its 2022 GDP growth forecast for Estonia to just 1% - the lowest in the European Union.

The economy then contracted by a staggering 14.7% in 2009, following a decline of 5.4% in 2008, amidst the global financial crisis.  Though it recovered with growth of 7.6% in 2011, with strong exports, economic growth slowed to an annual average of 2.5% from 2012 to 2016, mainly due to a sharp slowdown in the electronics sector and shale oil sector, and a decline in demand from neighboring Russia.

As a result, unemployment dropped to a record low of 4.4% in 2019. However in 2020, the nationwide jobless rate increased to 6.8%, due to coronavirus-induced layoffs, according to Statistics Estonia. The jobless rate fell slightly to 6.2% last year.  The European Commission expects unemployment to rise again to 6.8% this year and to 6.9% in 2023.

Following Russia’s invasion of Ukraine, Estonian Prime Minister Kaja Kallas has been calling for NATO and EU allies to increase its defense in the region, especially in the Baltics, as a deterrent to Russia’s aggression.

“If Putin wins, or if he even has the view that he has won this war, his appetite will only grow. And that means he will consider other countries. That’s why we have to do everything we can to stop him now,” said Kallas.

“Russia has increased the pressure or aggression on their side, so NATO should also increase the defence on the other side to be equal deterrent to the aggression that Russia poses,” Kallas added.

Kaja Kallas, the leader of the Reform Party, has become Estonia’s first female prime minister after Estonian president Kersti Kaljulaid nominated her to form the government on January 14, 2021 – after the collapse of the previous governing coalition, led by the Centre Party. Estonia has thus become the only country in the world where both the president and the prime minister are women.