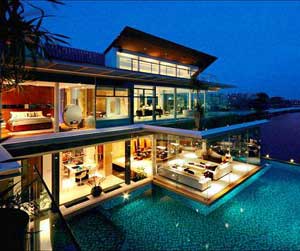 The owner of Singapore’s most expensive bungalow bought for US$32 million has revealed his plans for his new abode at Sentosa Cove.

In an interview with Indian publication “Tabla”, 33-year-old mining executive Mr. Shael Oswal reveals that the pricey bungalow will be used as weekend retreat of his two children.

“It is an investment for weekends,” he told “Tabla”. “I can take the children to Sentosa and when we get tired we can stay there.” Mr. Oswal, an Indian national, has another home in Grange Road and his children go to Tanglin Trust School and it would be tedious to go home to the Sentosa Cove bungalow every day, he shares.

His wife and mother took up the idea to look for a weekend home and the former home of Dr. Susan Lim caught their fancy because of its magnificent view of the sea.

Mr. Oswal notes that some renovation still needs to be done on the 5-bedroom seafront property now standing at 15,929 square feet and has 5 bedrooms, a separate entertainment area and grand living room.

Reports confirmed that this property has a 99-year lease leasehold property with S$2,448-worth of psf.

The former owners of this property, dubbed the most expensive bungalow in the island-city of Singapore, had allegedly been embroiled in controversial cases. Citi Private Bank chairman Deepak Sharma’s surgeon wife, Dr. Lim is now facing a legal dispute with the Singapore Medical Council that has placed their finances in disarray, reports alleged.

Sentosa Cove is the only place in Singapore where non-PR foreigners are allowed to buy landed homes.

Permanent residents, either foreign or local are disallowed to acquire property in Singapore. It is only in Sentosa Cove that home purchases are allowed. Buyers, in this area, according to government are to seek permission from the Land Dealings (Approval) Unit, which will evaluate applicants based on criteria such as having a PR status and making significant contributions to the country’s economy.