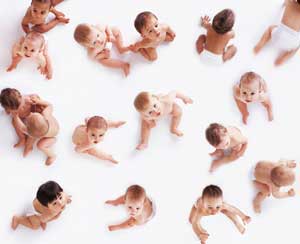 By the middle of 2012, the London population clicked over 8.308 million inhabitants according to the office of National Statistics.

The probable reason for the steady increase is the positive birth of 134,000 babies in the Capital.

By contrast, the mortality rate was markedly lower at 47,570 fatalities in London during the same period.

Net migration added a further 69,000 people which was calculated from 176,000 arrivals from overseas subtracted by 107,000 departures.

Additionally, there are U.K residents that move to the Capital for work and some older residents move to the countryside when they retire.

More U.K residents are moving to London and the South East in general as The North still struggles with slow high unemployment.

The growth in the London population is not matched by the number of new homes being built. The target of 250,000 new homes has been missed for several years further exhibiting the housing crisis. Even though there was an improvement on the previous years’ new builds with 115,000 new property completions.

Areas like Hackney and Islington have quite a number of Turkish and afro-Caribbean families that generally have larger families and have contributed to positive population growth rates. Islington is an excellent place for London Investment Property with exceptional rental demand because it is close to both ‘The City’ and West End.

Wandsworth is another London borough that has benefited from the baby boom as it fits within (what is commonly known as) the ‘Nappy Valley’ where newly-wed city workers are starting their families. It is also in the catchment area of Chelsea, Fulham and the Nine Elms project near Battersea which are all extremely popular with overseas buyers.

Making money from property investment is not rocket science.

A large contributor to creating a successful property portfolio is seeking out areas with an imbalance in supply and demand.

It really is quite simple, where there strong demand for rentals and there are few rental properties would result in higher rents and lower vacancy rates. Where there is shortage of properties for sale and large demand for properties results in price rises.

If we take Canterbury for instance there are 149,000 inhabitants and 46,000 student’s means that there is a lot of completion and demand for properties, the rents are high which makes for good investments and therefore demand for properties. It is a small Cathedral City with limited planning which restricts supply resulting in a 60% price rise that we have seen over the past 10 years.