Analysis: Are you investing for growth or income in the current climate? 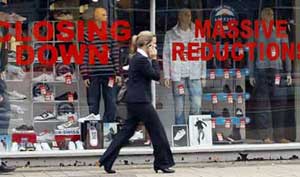 Since the 1960’s there has historically been a recession in the U.K more or less five years. The last time we had a recession was in 2008 so we are due for one in 2013. There are several facts which point towards another recession. How will that effect your financial position and what are you choosing to invest in?

During the periods between 1992 and 2008 there was no recession because of low oil prices, increasing borrowing through the creation of (false money) through collateralised debt obligations CDOs and low inflation by outsourcing to India and China.
Since then the U.K experienced the financial crash of 2008. Lending to both businesses and for mortgages practically disappeared. The government nationalised a few banks Northern Rock, Bradford and Bingley, Mortgage Express and provided billions of loans to others RBS, Natwest etc. Private Debt has become public debt with little chance of this being repaid because of the slow growth tax receipts are reduced so the government cannot repay its debt.

The only way that government can practically reduce its debt is by printing money to help stimulate business growth. But according to the BBC only 0.02% of the £32 Billion of quantitative easing has actually been loaned on to businesses.

The retail price index is between 4% and 5% which indicates increases in prices but actual GDP declined by 0.3% in the first quarter according to the ONS Office of national statistics. Real wages were in declined by 2% in 2011.

If the government solution is to print money and the money is not being loaned to businesses so there is effectively no growth, how is the UK economy going to recover? More importantly, what does that mean for your financial future?

If interest rates on bank savings are circa 3% according to Money Facts and your real wages are declining by 2% your savings are not really going to amount to much.

Investing for Growth or Yield

Depending on your situation and age; investors can choose a strategy which is most applicable to their situation. If one has substantial time to generate a passive income then growth is possibly a good strategy. On the other hand, if a person has only a few years to retirement there is a sense of urgency to put ones money to work but with a focus on assets that will generate a steady income.

Gold and more recently silver is seen as a safe haven in time of financial uncertainty. Instead of holding currencies or assets such as property within that currency, people choose to invest in commodities, such as Silver and Gold because they retain their value or even grown in value.

The Eurozone is a state of heightened uncertainty with Southern Member Countries such as Greece, Spain and Portugal unable to meet their debt obligations without financial assistance from the European Central Bank (ECB) or their northern member states such as Germany and France.

Greece and Spain cannot improve economic growth when there are harsh but necessary austerity measure imposed by ECB as part of their bailout conditions. Germany recently agreed to loans to Greece without austerity measures but how is a country with such low productivity going to repay its debts?
This uncertainty in the EU has led to many investors seeking security in the Dollar. There have been signs of some improves in the USA economy but this has mainly been as a result of qualitative easing as trillions of Dollars has been printed.

The deficit is now 15.5 Trillion Dollars and the only reason they have been able to continue printing money is because so much money is held in US bonds due to it being the reserve currency. However, if only a small number of investors lose confidence in the US dollar as a reserve currency and shift say 10% of the Bond holdings to gold it could result in a projected increase from $1550/Troy ounce to $4,000/Troy ounce. Gold could be a good investment for growth even at its current high levels.

Invest in London property for Growth. Overseas investors have flocked to London for property investment as it is seen as a safe haven for investment because it has held its value and the rental demand is still strong. Middle Eastern and Russian Investors are most active in Kensington, Chelsea, Maida Vale and St John wood. With Canary Wharf and regeneration areas such as Battersea developments being acquired by Hong Kong and Singaporean investors according to London developers.

The continued attraction of London depends very much on its role as a financial centre in the future Eurozone. For years, England has conducted transactions between the USA and European countries. With talk of a closer more financially centralised Europe it is not quite clear what London’s future position will be.

For now, the future still seems quite positive for London. The number of companies that chose the list on the London stock exchange increased comparative to New York and Hong Kong in 2011 according to Money Week.

Most of the customers of One Touch Property Investment are between the ages of 50 years – 65 years, according to company data. These clients are essentially looking for a safe place to invest in hands-off property generating high yield income that will be suitable for their retirement.

Investing in buy-to-let property generates an average of around 6% net rental incomes according to the Association of Rental Letting Agents. Some investors are achieving yields of 8.5% in the North of England because of the lower purchase prices.

The typical but-to-let mortgage available to a UK resident up to 75% of the purchase price and attract an interest rate of between 4% and 5%. Even though the projected rise inflation over the next two years with definitely increases your mortgage payments, it also decreases your mortgage amount in real terms which is what those investing for growth may be interested in.

However, those focused on this property investment may be disappointed with the small spread between the rental income and the relatively high cost of finance (considering the low base rate at 0.5%). Making only 3% does not leave much margin for vacancy rates and could quite easily be eroded by the cost of future repairs.

The other alternative is student accommodation investments http://www.propertymarket-investment.co.uk/student-accommodation-investment/student-pod-investment.html; we are not talking about converting a residential property into an HMO in a student town and managing that yourself.

Those sorts of student houses are more suited to the professional landlord who is based locally and mages it themselves. There are student halls of residence that are refurbished to a high standard and made available for owners to purchase each individual room.

An en-suite room in Victorian conversion student accommodation investment would cost almost £52,000 and generate a net income (after lettings fees and service charges) of circa 9.3%. Although the high yield and the fact that it is fully-managed attracts a number of investors, there is no mortgage finance available for these sorts of purchases, so it is limited to cash buyers.

With the record number of young people including graduates that are currently unemployed, it is questionable what the future rental demand will be. The cost of University education is set to increase to up to £ 9,000 per year in 2013. It remains to be seen how these increases may affect university attendance.

Your plan of action

In conclusion, there is a high level of uncertainty on the horizon. No one really knows what future of the Eurozone looks like and quite how the USA will pay off its Trillions of borrowing. What is certain is that it the U.K is inextricably linked to our main trading partners and the events in the near distant future could have a dramatic impact on your financial well-being. Whether is it investing for growth or income, a planned investment strategy is needed to ensure that you make the most of the current circumstances.