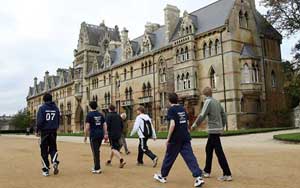 This question kind of answers itself but not always for the reasons we think.

Good schools usually come bundled with other neighbourhood qualities-- such as proximity to employment, shopping and recreational amenities.

Homebuyers who enjoy (and can afford) such amenities tend to congregate together.  So how do you isolate the effect of schools from the effect of these other traits that accompany good schools and good neighbourhoods?

It would seem intuitive that the closer a property is to a school; the more desirable the property would be to families with children served by these schools. The benefits which are valued by parents relate either directly or indirectly to accessibility to the school (most apparent in terms of the safety of and time spent by children commuting to school). This increase in desirability could result in increased value of the property relative to similar properties at greater distances to the school.

Studies have shown significant relationship between a residential property’s proximity to public schools and the property’s value as predicted by sales prices. The further a property is away from the schools, the less value a property might have.

Based on studies of neighbourhoods where a school was closed down and the before and after effects analysed, it has been shown that if a school closes down the negative impact is both based on the school closing and the perceived negative impact of disinvestment in a particular area.

Further the impact of proximity was more consistent over time than school quality. The impact is consistently significant for all school levels and over time.

So while the obvious benefits of good schools and proximity to them have been noted it’s also important to note that too many schools in an area, no matter how good the schools are, may actually serve as a disadvantage. Not everyone wants to live near schools and certainly not too many. The increase in traffic and noise may be off-putting to many, particular those not enjoying the advantage of these schools.