Despite the coronavirus crisis, Israel's housing market remains robust, buoyed by strong fundamental demand. In the first three quarters of 2021, the total number of dwelling transactions in Israel surged by almost 39% y-o-y to 39,363 units, following growth of 20% in 2020 and 48% in 2019, according to the Central Bureau of Statistics (CBS). Transactions soared 55.5% in Tel Aviv and by 25.5% in Jerusalem.

Israel has experienced dramatic house prices rises in the past decade (2011 excepted), despite domestic political uncertainty, security threats, and the global financial meltdown. Israel's house prices have risen by 118% (82% in real terms) from 2006 to 2017.

The main reason for the surge in house prices until 2017 was a supply shortage, due to low construction volumes. Other factors fueling the house price boom included the central bank's expansionary monetary policies, and the lack of alternative investment options.

However since summer of 2011 when thousands of Israelis set up protest camps over worsening housing affordability, home prices have been top of the government's agenda.

Israel's economy is projected to expand strongly by 7.1% in 2021, fully offsetting the 2.2% contraction seen during 2020 and the biggest growth since 2000, according to the IMF's October 2021 forecast.

Property in Tel Aviv and Jerusalem is very expensive, and rental yields are poor

Gross rental yields i.e., the rental return on a property if fully rented out, before all expenses, are poor in Tel Aviv and Jerusalem - almost at Monaco-like levels. Gross rental yields for apartments are near or under 3% (though some areas have higher yields).

This tends to support the popular view that property is somewhat overpriced in Israel.

Tel Aviv is a more expensive city to buy or rent property in generally than Jerusalem. In both cities prices have risen strikingly in the past few years. Prices in Tel Aviv range from US$10,000 to US$21,000 per square metre (sq. m.), whereas four years ago, we found the cost of a 120 sq. m. apartment to be typically around US$ 7,800 per sq. m.

These are the sort of prices that can be seen in Swiss cities of Geneva and Zurich, or in Canada’s Toronto and Vancouver.

Despite Tel Aviv's higher purchasing price, it generally generates higher yields. The City Center (4.58%) and Ramat Aviv (3.84%) are the best-yielding areas in Tel Aviv. In Jerusalem, it is Rehavia (3%) and the City Center (2.84%).

Rental Income: Rental income is taxed in Israel. Taxpayers can opt for a flat 10% tax on gross rent (without any deductions), or progressive income tax rates on net income.

Capital Gains: Most properties sold in Israel are exempt from capital gains tax. If the gains are taxable, the net gain is taxed at the standard income tax rates.

Inheritance: Israel has no inheritance tax.

Residents: Resident individuals are taxed on their worldwide income and capital gains at progressive rates.

Buying costs are low in Israel

Roundtrip transaction costs, i.e., the costs of buying and selling a property, are around 6.236% to 7.236% of the total property price. The buyer shoulders most costs. Buyers must check what is included in the purchase price because property in Israel is sold with just the bare walls, unless otherwise agreed. Buyers must also check first if the land is zoned for building, not for agriculture. 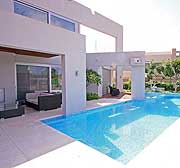 The pandemic has caused quite high unemployment - the seasonally-adjusted unemployment rate was % in October 2021, up from 4.7% the previous year and 3.6% two years ago, according to the CBS.

In June 2021, a new coalition led by Naftali Bennett from the Yamina party and Yair Lapid from Yesh Atid obtained the required votes – 60 out of 120 Knesset members – in favour of the new government. The coalition agreement includes a rotation government, whereby Bennett would serve as Israel’s PM until 2023, after which Lapid would assume the role until 2025.

Yet political analysts predict that the new government, which consists of eight parties ranging from left to the far right, is very fragile and could easily break due to enormous ideological differences. For the first time, a Palestinian party, the United Arab List, is also a member of the coalition government.