Belize's property market continues to grow strongly, thanks to a surge in tourist arrivals. House prices are now above pre-crisis levels. In fact, property prices in Belize, especially in favourite locations such as Ambergris Caye and Placencia, have risen by double-digit figures annually during the past four years, according to local real estate experts.

“Scarcity in beachfront land and skyrocketing tourism rates are driving prices up,” said Andrew Ashcroft, developer of Alaia Belize on Ambergris Caye. “Since the crisis property prices have increased by 100% overall.”

Even in the country's rugged jungle areas, house prices are rising strongly, thanks to growing interest from foreign buyers. In the rural Cayo District, property prices have risen by about 5% to 7% annually over the past five years. For instance, a 15-acre coconut farm, which was recently sold for US$225,000, had changed hands for just US$165,000 five years ago, said Macarena Rose of Keller Williams Belize.

Actually, it is difficult to be sure how much house prices have changed, as there are no official house price figures. However, realtors estimate that house prices declined by as much as 25% to 30% during the global economic crisis. Property rebounded strongly in 2012, and has continued to rise since then.

Outside buyer interest in Belize rose rapidly from 2000 to 2007, partly due to the passage of the Retired Person Incentive Act (RPIA) in September 1999, and to the tourism boom. Tourists flocked to Belize's natural wonders - beautiful beaches and tropical forests, plus ancient Mayan temples. From 2003 to 2007, property prices in coastal and tourist areas rose by as much as 30% annually, while prices of inland properties rose by around 15% annually, according to local real estate agents.

Ambergris Caye and Southern Belize - Placencia - continue to be the two most popular areas for foreign homebuyers. Ambergris Caye has the most expensive housing in Belize, because tourists and expats are attracted to the beauty of the Barrier Reef. One- to two-bedroom oceanfront condominium units are priced at about US$300,000 to US$700,000, while three- to four-bedroom oceanfront houses are priced around US$1 million.

More affordable houses are found in the south, especially in the Placencia Peninsula and nearby areas such as Sitee River, where residential properties are usually priced 40% lower than those on Ambergris Caye. One- to two-bedroom oceanfront condominium units are priced between US$200,000 and US$500,000. In fact in new luxury small-scale resorts such as Falah del Mar, located in Placencia Peninsula, prices of studios start at just US$190,000, according to Ray Withers of Property Frontiers.

Some expats choose to settle in areas close to the border with Mexico or Guatemala. Corozal Town in the north (bordering Mexico), and the Cayo District in the west (bordering Guatemala) are some popular places for expat retirees. In San Ignacio, Cayo District, three-bedroom homes are priced around US$150,000 to US$400,000.

Aside from being the only English-speaking Central American country, and natural beauty, what attracts foreigners, specifically retirees, is the &quot;Qualified Retired Persons&quot; (QRP) program. Similar to Panama's Popular Pensionado Program, the QRP program gives tax and residency breaks to foreigners with the status of a Qualified Retired Person (QRP). To be designated a QRP under the program, the applicant should be:

Beneficiaries of the QRP status are:

Based on the International Living's Annual Global Retirement Index, Belize was among the top 24 best places to retire in 2020. The index was based on several factors including cost of living, retiree benefits, climate, and healthcare. Likewise, Forbes also listed Belize as one of the best places to retire abroad last year.

“Many international buyers are just beginning to discover the potential opportunities of investing in this tiny central American nation bordering the Caribbean Sea,” said Christopher Todd of SANCAS Realty. “Savvy buyers can find tremendous value in Belize, especially on the Placencia Peninsula in the Stann Creek District, and in the Cayo District to the west.”

Around 15% of the Belizean population is composed of foreigners, according to International Organization for Migration. Yet Belize is one of the world's least densely populated countries, currently averaging 14.1 persons per kilometer.

Foreign nationals represent 95% of homebuyers in Ambergris Caye, in the Cayo District, and the Placencia Peninsula, according to SANCAS Realty.

Most foreign buyers come from the United States. There are direct flights from numerous U.S. cities, including Houston, Chicago, Dallas, Miami, Charlotte, Atlanta, Los Angeles, and Newark. There is also a growing interest from Canadians, Britons, Italians and Russian investors.

Most property transactions are done in cash, as Belize's banks charge high interest rates. The Belizean dollar is tied to the US dollar at a fixed exchange rate of 1 USD = 2 Belizean dollar.

There are no restrictions on foreigners purchasing real properties in Belize.

House prices in Ambergris Caye remain stable, with an average selling price of US$450,000. Last year houses sold for an average of US$ 420,000.

This year, included condos in our research. Condos in Ambergris Caye sell for US$2,660 to US$3,330 per square metre.

Rental Income: Rental income is considered as business income, and is taxed gross at a flat rate of 3%.

Capital Gains: There is no capital gains tax in Belize.

Inheritance: There is no inheritance tax in Belize.


Residents: Residents are taxed at a flat rate of 25% on their employment income. Income from other sources is subject to business tax, wherein the applicable tax rate depends on the classification of the income.

Buying costs are moderate in Belize

Sale of new properties is subject to 10% General Sales Tax.

Rent: The initial rent can freely negotiated. The Rent Restriction Act, however, limits rent increases to 10% annually or at a level mandated by the district Rent Assessment Board.

Tenant Security: Non-payment of rent and sub-letting without the landlord’s knowledge are grounds for eviction. Landlords, through a court order, can forcibly enter to reclaim the property from tenants, and claim compensation for damages and unpaid rent. 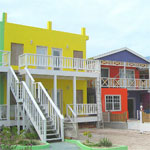 Despite this, external trade remains strong. In 2019, Belize’s total merchandise exports rose by 4.6% to BZD 411.8 million (US$) from a year earlier, while imports increased 2.9% to BZD 1.97 billion (US$), according to the Statistical Institute of Belize (SIB).

The economy is expected to expand by 2.1% this year and by another 1.8% in 2021, according to the International Monetary Fund (IMF).