To make matters worse, the January 2005 Multi-Fiber Agreement, which ends textile quotas, has impacted the CNMI, which long enjoyed the almost unique advantage of a low-cost Asian labour force except from US visa and immigration rules, at the same time as it sold its textiles quota-free in the US domestic market. This special advantage has now vanished.

CNMI building prices tend to be volatile as a result of Article 12 of the Constitution, which bars foreigners (Non-Northern Marianas descent) from acquiring real property fee simple. Local law requires property owners to be of at least 25% CNMI descent.

Calls for repealing Article 12, or extending the lease term beyond 55 years, have become more insistent as a result of the economic slump.

But as Article 12 prevents the Commonwealth from being overwhelmed by tele-commuters and retirees, feelings can run high, and recently proposed amendments of the lease period were defeated in the House of Representatives. 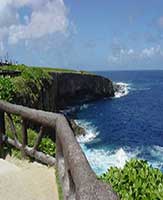 At present there is no multiple listing service for real estate vacancies in CNMI neither is there any other formal mechanism for an industry-wide participation for the industry members and, thus, no industry-wide data on prices on otherwise.

Taxes are in practice moderate

Capital Gains: Earnings or gains from the sale or lease of personal property within the CNMI are subject to flat rate of 30%. However, if the taxpayer files an income tax return in the islands, he is entitled to 100% rebate on this tax, and can pay capital gains tax at progressive rates.

Garments and Tourism: backbones of the economy 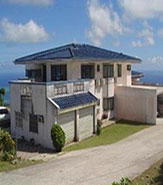 The Commonwealth of Northern Mariana Islands or CNMI is self-governing, but politically linked to the US. The CNMI has one of the smallest land masses among the South Pacific Islands as 176.5 square miles (457 sq. km.)

The CNMI used to be a part of the United Nations’ Trust Territory of the Pacific Island (TTPI) that the United States administered after the end of the Second World War. In 1978, the Islands came into being “in political union with and under the sovereignty of the US” and became a US commonwealth. The commonwealth’s new status allowed for different immigration, labor and wage laws relative to those practices in the mainland. Although considered US citizens, CNMI citizens do not vote in federal elections and are exempt from paying federal taxes.

Because of different immigration laws, the billion dollar garment industry has long employed thousands of migrant workers from the Philippines, China and other nearby countries. There are more migrants than indigenous Chamarro and Corolinian population in CNMI. The garment industry has been severely impacted by the lifting of import quotas on Chinese-made garments in 2005 as mandated by the World Trade Organization (WTO).

The economic woes were exacerbated by the decline of tourist arrivals especially from Japan; about 60% to 75% of the 0.5 million tourists visiting CNMI annually come from Japan. In 2005, Japan Airlines ended flights to the territory. However Korean tourism has been increasing, with Asiana Airlines increasing its flight numbers, and China Eastern Airlines now flied to Saipan four days a week, promising a large flow of Chinese tourists.