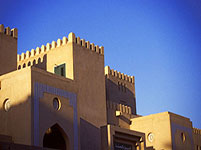 Residential property prices and rents in Oman declined by about 10% to 20% in 2016 from a year earlier, according to local real estate experts.

"The economic situation has had a negative impact on employment and job generation....reducing demand for property in the capital area as fewer people are now willing to rent or buy properties," said Mohammed al Busaidy, the chairman of Oman Real Estate Association (OREA).

The value of real estate transactions in Oman plunged almost 70% to OMR1.42 billion (US$3.69 billion) during the first half of 2017, according to the National Centre for Statistics and Information (NCSI), compared to the same period last year.

"The real estate sector will undoubtedly continue to be under pressure for as long as the present economic uncertainty prevails," said Christopher Steel of Savills Oman. "However, save for a few sectors which face continued pressure due to oversupply, we predict that 2017 will offer a period of calm and relative stability."

This was supported by Philip Paul of Cluttons, who believes that the real estate market will see only moderate price declines this year. "Steep corrections that happened in 2016 are unlikely," said Paul.

Property prices in Integrated Tourism Complex (ITC) developments have been more resilient, due to steady demand from expatriates who are less affected by low oil prices. In fact, employment of expats in the private sector increased 9.3%, as compared to a 6.4% rise for Omanis, according to the CBO.

Under current laws, expatriate owners automatically get residency rights for themselves and their immediate families when they buy property in designated ITC developments.

Growing expat numbers have fuelled a real estate boom in Oman. The expat population rose by more than 12% per annum during the period 2004-2016, and by July 2017 there were about 2.07 million expats in Oman, according to NSCI. The expatriate workforce reached 1,864,227 people in April 2017, a 5.7% increase from a year earlier.

Foreigners account for almost 90% of all workers in Oman's private sector, according to the Manpower Ministry. In Q2 2017, Oman's population of 4.58 million was 55% native Omanis and 45% expatriates, far from the 75:25 ratio of Omanis and expats in 2004. Oman's population is young, with a median age of 24.9 years.

The major ITCs such as Al Mouj Muscat (formerly The Wave), Muscat Bay(formerly Saraya Bandar Jissah), and Muscat Hills Golf and Country Club have led the country's housing market in terms of growth and value. These ITC developments have continuously attracted owners and tenants, with "virtually zero" vacancies and high rents, according to Savills Oman, due to their superior design, setting and facilities.

In Al Mouj Muscat and Muscat Hills, resale values of apartments are stable, according to some local property experts.


Aside from the continuous interest in the ITCs, there have been significant 'off plan' sales of new apartment developments in the Muscat neighborhood.

The governmenthas recently embarked on opening up more areas for expats and foreign homebuyers.

In April 2017, the Ministry of Tourism signed an agreement with Amouage Hotels and Resorts for the development of Naseem A'Sabah, an integrated tourism complex worth OMR400 million (US$1.03 billion). This will be located on North Al Mawleh Beach, in the governate of A'Seeb and will feature a five-star hotel, a marina, a yacht club and 696 housing units. Construction will begin next year.

"Any expatriate living in the country can own a house in this first project that is built on the sea-reclaimed land off Mawaleh," said Tourism Minister Ahmed bin Nasser al Mehrzi.

"This project is part of our Oman Tourism Vision 2040 and with this, we aspire to achieve rapid development of tourism in the Sultanate," the tourism minister added.

A few years back, Cluttons forecast that a two-tier market would develop. Properties well-matched to tenant desires in terms of quality and design would have high occupancy rates and relatively stable rental values. Poorly built properties would have declining rents, and be mostly uninhabited.

This is largely what has happened. There has been a continuous drop in demand and declining rental levels for older-style properties in the established central areas. The take-up of these properties has been very slow, due to a surge of new modern apartments with amenities and finish meeting international standards.

In some areas, however, rents have remained stable. There have even been slight rises in areas benefiting from the improved accessibility brought by the Expressway and new interchanges.

Cluttons predict that overall residential rents in Muscat will fall further by 5% to 7% during 2017.

More than 1,600 new rental apartments in central areas werecompleted over the last 12 months, according to Savills Oman.

The Central Bank of Oman (CBO) has enforced a 6% interest ceiling on personal loan interest rates (which include housing loans) since October 2013. In Q1 2017, the average lending rate was 5.12%, having declined somewhat in recent years.

Residential housing loans were about 9.8% of total bank credits in 2016, up from 7% a year earlier and still well within the 15% ceiling stipulated in June 2014, according to the CBO.

Oil remains Oman's top revenue generator. In 2016, oil and gas revenues accounted for more than 68% of total government revenues and about 57.9% of total merchandise exports, according to the CBO.

Yet this was partly the effect of lower oil prices. In real terms, Oman's GDP contracted by 5.1% in 2016, following a contraction of 13.8% in 2015, mainly due to the decline in crude oil prices, according to the CBO. The hydrocarbon sector fell by 23.7% in 2016 while the non-hydrocarbon sector grew slightly by 0.6% last year.

"Going forward, the hydrocarbon sector is expected to further slow down in 2017, despite some recovery in oil prices, due to lower production as part of the OPEC and other oil producers' agreement," said the central bank.

The key changes include: