Property in Cayman Is.

“We are into unchartered territory in the property market,” said Simon Watson of Charterland. “The market has recovered from the downturn of 2010 and is now way beyond the previous peak.”

Growth is centered along Seven Mile Beach for condominiums, and Cayman Kai, on the island's north, for single-family homes. The most expensive housing is along Seven Mile Beach, a coral-sand beach on the western end of Grand Cayman island. Property prices can reach as high as KYD1,500 (US$1,800) per square foot (sq. ft.). Prices surged 33% in 2018.

Residential construction is falling. In Grand Cayman, residential building permits fell by 10% in 2018 from a year earlier. The total value of permits for houses was down by 13.3% and by 4.3% for apartments and condominium units. Likewise, approved applications fell by 15% to KYD 286.65 million (US$344.8 million) in 2018.

Rental incomes in Cayman Islands - good rental yields, ranging from around 5% to 8.2 %

In Cayman Islands, rental returns can be surprisingly good. Condominium costs on 7 Mile Beach vary in a wide range, with prices from about US$4,000 to US$11,000 per square metre (sq. m.), and some super-luxury large condos hitting amazingly really high per sq. m. prices.

Our property sample for larger condos was too small to give an accurate picture of rental incomes for this property category.

Rental yields in the other beach communities in Grand Cayman were even better. Properties are less expensive, at about US$2,000 to US$3,000 per square metre, but the expected rental income from these properties is about US$1,000 to US$3,000, giving rental yields of from 7.48% to 8.17%.

In the Cayman Islands, really large properties are less attractive in income terms, with much lower rental yields.

We were surprised by the generous rental yields on smaller and medium-sized condos. But in recent years, high yields have been normal in the Cayman Islands. 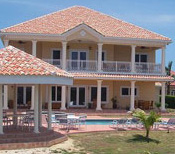 Stamp duties are levied on lease contracts and transfers of properties.

Rental Income: Owners leasing properties to tourists are liable pay to tourist accommodation tax a levied at 10% on the gross rent without any deductions.

The law is pro-landlord in Cayman Islands

Rent: Rents and rent increases can be freely negotiated. Landlord power is strong. Landlords can (in practice rather than strict law) increase rents in mid-lease, and impose surcharges for late rents.

Tenant Eviction: There are no specific legal provisions regarding rental contract termination. Landlords often give tenants notice a few days before contract expiry. Using formal legal channels, it takes an average of 180 days to evict a tenant.

The Cayman Islands is one of the most affluent countries in the Caribbean. Thanks to its twin pillars of development, tourism and international finance, this British overseas territory enjoyed average real GDP growth of 3.1% annually from 1998 to 2007. The country is the world's sixth largest banking center.

"Cayman is a First World country in the Caribbean with a large international business community and well developed, diverse facilities including hospitals, schools, golf courses and hotels," says Charles Weston-Baker of Savills.

In 2018, the economy grew by 3.3%, up from the prior year’s 3% growth and the highest expansion since 2006, according to the Economics and Statistics Office (ESO).

Tourism accounts for around 30% of the islands’ GDP. Tourist visits from the United States and Canada continue to increase. In 2018, total visitor arrivals rose by 11% y-o-y to a record 2.38 million people, according to the Cayman Islands' Department of Tourism.

During the first three quarters of 2019, stay-over visitors rose by 10.3% to 386,290 tourists from the same period last year. Over the same period, cruise arrivals fell by 5.9% to 1,332,159 tourists. The United States accounted for more than 84% of all stay-over arrivals in Cayman Islands during the period.