Where to buy property in Zamoskvorechye, Russia 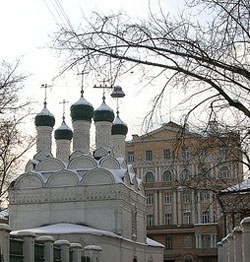 The old neighborhood of Zamoskvarechye lies near the heart of Moscow, with the inner Garden Ring Road as its southern border. The other end is separated from the Kremlin’s southern wall by the Moscow River. It is a quiet old neighbourhood and quite a bohemian one, ever since the 19th century when wealthy merchants moved in, built large mansions and began sponsoring local artists. Art galleries, museums, antiques shops and cafés now abound in the area.

Bolotnaya Ploshchad (Marshy Square), where people were once publicly executed, is now a park. Its centerpiece is a group of statues called “Children Are The Victims Of Adults’ Vices” – two small bronze statues of children playing, and around them are arrayed large grey, odd statues—some with animals’ heads on human bodies—representing 12 vices, including drug addiction, prostitution, theft, alcoholism and child labour.