Where to buy property in Zala, Hungary 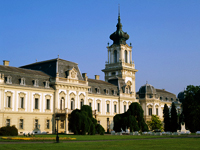 Named after the Zala River, Zala county borders Croatia and Slovenia. Its capital is Zalaegerszeg.

The county's glorious natural landscapes continue to attract more and more visitors each year. The enchanting forests of Bakony and G�csej, the crisp climate of Azalea Valley in Zalaegerszeg, the pine trees of Budapapuszta Arboretum and the sparkling waters of Lake Batalon are but several of a few examples. Also here is the most significant medicinal bath is in Zala county, found in the world's �largest thermal lake, Lake H�v�z. This is the only area in Central Europe where Indian Water Liliies grow in the open air and in thermal waters.

Zala also offers numerous manmade sites.� In Zalasz�nt� for example, there is the Park of Human Rights where numerous architectural symbols have been constructed in honor for those whos rights have been infringed. Included here is the Buddhist stupa, visited by the Dalai Lama during its inauguration.

Keszthely there's the well-known Festetics Palace (Festetics-kast�ly), a massive baroque palace, begun in 1745, but in fact bult over 100 years. It is one of the three largest country houses in Hungary. The opulent furnishings and refurbishing in the 101 rooms have been done with great attention to detail. The counts Festetics were progressive landowners.

The oldest open-air museum in Hungary is found in Zala, the G�csej Village Museum (Falum�zeum). The buildings here are constructed around a portion of the the River Zala and an old water mill.

Hunting for game is a popular activity in this heavily forested area. There are numerous wild boar, and roe deer in the region, as well as the red deer which are knowon for their amazing hind-antlers, easily a 15 kg trophy for any skilled hunter.