Where to buy property in Zagreb Region, Croatia

The central region of Zagreb echoes the crescent shape of Croatia itself. It is also known as the Zagreb ring, since it almost completely surrounds the capital city of Zagreb. The city itself is not part of the county. 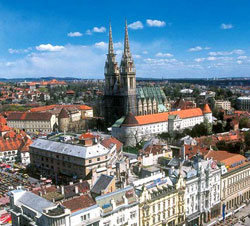 Croatia’s largest city and national capital, Zagreb, is a thousand-year-old city on the banks of the Sava River. It used to be overlooked by tourists who saw it as a stopover on their way to the beaches on the Adriatic, or to Dubrovnik and Split, or to the wine regions.

But Zagreb is now becoming known as a chic, friendly destination for travellers who want to enjoy the charms of a European city but on a smaller budget. Zagreb is a great place to walk around in, full of green areas and pedestrian zones, with many of its sights not far from the main square. Zagreb also has a lively café culture and good shopping areas in the city centre. A notable feature of Zagreb is Lenuci’s Horseshoe, a series of eight parks and eight tree-lined squares. Monuments, pavilions, flowerbeds and trees grace the Horseshoe as it runs from the main station to the city’s main square and back.

Zagreb may be a busy, energetic modern city, but it has also retained its Old World, distinctly Central European appeal. Two of its oldest areas are the fortified, 13th feudal city of Gradec and the settlement of Kaptol, both in the upper town area of Gornji Grad. These beautiful old towns draw regular visitors who enjoy walking through it and having a beer in the pubs and restaurants afterwards after a day of admiring their historic buildings and elegant monuments.

Zagreb is easily accessible, with an international airport and good rail and road links to Budapest, Ljubljana and Vienna.