Where to buy property in West Flanders, Belgium 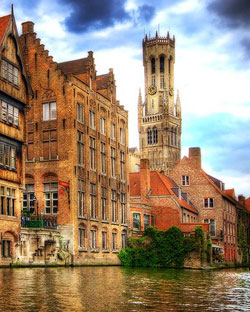 The northwest province of West Flanders is a busy centre of commerce, industry and tourism. It faces the North Sea, which has the world’s busiest shipping lanes, extensive fishing grounds and extremely large reserves of oil and gas.

Belgian and foreign tourists flock to West Flanders, especially in the summer. The world's longest tram line, the Belgian Coast Tram, runs along one entire side of the province from De Panne on the French border through the port of Oostende until it reaches the municipality of Knokke-Heist on the other side of the Zeebrugge (Brugge port). The tram brings thousands tourists to West Flanders’ coastal towns, with their beaches, seaside cafés and restaurants.

Housing on the coast consists of large villas, apartment buildings and hotels along town esplanades, running parallel to a shore that gently slopes down to the sea. In daytime, residents and tourists are at the beach swimming, boating and windsurfing. When the sun sets, the towns become brightly lit centres of nightlife.

Agriculture is a major industry in West Flanders, thanks to fertile soil in which grains, potatoes and sugar beets thrive. In the south, the textile industry is a major employer.

Bruges was once a major centre of European trade and commerce, but is now mostly known for its beauty and old-world charm.
In handy tourism lingo, West Flanders' capital is often called the Venice of the North, but the appellation hardly does it justice; Bruges is beautiful and historic in its own right.

Bruges is a city of canals. These encircle and wind through the city, and gondolas and barges take people and cargo (because it still is a centre of commerce) from one end of the city to the other. The first place that the visitor encounters upon entering the city is the romantic canal-lake Minnewater, or Lake of Love. There are plenty of swans on the lake, which has become a favourite spot for lovers.

Bruges is also a city of museums, chief of which is the Groeninge, which houses several works from great Flemish masters. Jan van Eyck’s masterpiece, Madonna of Canon van der Paele, occupies pride of place here.

But the city itself is a living museum of its glorious past. It is perhaps the most perfectly preserved medieval city in all of Europe. With the same reverence that it cares for its priceless works of art (the only Michelangelo in Belgium can be found in a church here), Bruges keeps the memory of the past alive in its narrow cobblestoned streets, its arched bridges spanning the canals, and its old brick houses, all of which date back to Bruges’ heyday of the 13th, 14th and 15th centuries.

However, Bruges does not completely live in the past. It is also a lively centre of modern culture and business, of chocolates and lace. Almost every street in the city has at least a chocolatier and a lacemaker, and any shop that doesn’t sell either of these famous Belgian luxuries probably sells another thing that the country is famous for: the works of its cartoonists.

Bruges is also one of Belgium's major economic centres, because of its port of Zeebrugge on the North Sea coast.

The municipality of Kortrijk lies on the river Lys that runs through France and Belgium. With the French city of Lille, it forms the Eurodistrict of Lille-Kortrijk, crossing national boundaries to emphasize the region's shared culture and economic potential.

Like the other municipalities in the area, Kortrijk is known for its textiles. A substantial percentage of its population works in flax and textile production.

Kortrijk has two UNESCO World Heritage sites: a freestanding medieval belfry, with a 48-bell carillon and topped by the statue of Mercury rising from its central spire, and the old Beguine convent in the very centre of town. 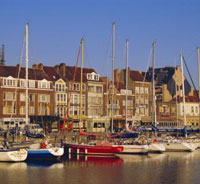 Ostend is Belgium’s most famous resort city for a reason. Its main attractions are its 9-kilometre stretch of sandy beach and its lovely esplanade from which visitors can have fresh seafood at the seaside restaurants after watching fishermen haul in the day’s catch.

Farther away from the North Sea shore, the town also has good hotels and villas. The Langestraat is the centre of Ostend’s entertainment district, with two cinemas, several pubs, clubs and cafés and even a casino.

Once a humble fishing village, Ostend became the country’s most fashionable seaside resort in the 19th century when King Leopold I decided to go on holiday there and made it a habit. His son, Leopold II, loved being in Ostend so much he had several villas built. Ostend’s royal visitors made their mark; many streets and places here are named after various members of Belgium’s reigning family.

The city’s is still very popular as a holiday destination for well-off Belgians and for holidaymakers from other parts of Europe. Thanks to the ferry service between Dover and Ostend, the Belgian city is a favourite among the British. Ostend is also becoming a destination for tourists from the US and Asia.

Roeselare is comprised of the Roeselare city proper and the towns of Beveren, Oekere and Rumbeke. The municipality is 60 square kilometres in area, with a population of more than 55,000.

Sights to see in Roeselare include the Main Market Square, where you can find the City Hall and a 16th century convent, the National Cycling Museum, the medieval St. Michael’s Church, and the small but lovely Rumbeke Castle, its tower topped by an unusual, waterdrop-shaped spire. The castle is situated in the middle of a forest.

Not far from the main square stands a statue honouring a local folk character named Peegie, who personifies the perseverance and spirit of the tradespeople of Roeselare.

The municipality’s park includes the Goat Park, which has several ponds, and the Noordhof, a beautiful English-style garden.