Where to buy property in Vicalvaro, Spain 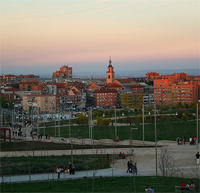 Vicálvaro in the southeastern part of the city was until some decades ago a rural area. It can be divided into three subdistricts: Vicálvaro, the old quarter; Valdebernardo, the western part of the district which is barely a decade old; and Valderrivas, named after the cement plant which once stood on the land the subdistrict is in now. Four new neighborhoods are planned in Vicálvaro, so new that construction only began a couple of years ago.

Vicálvaro has only been part of Madrid since 1950. A prominent building in the district is the Church of Santa Maria de la Antigua, which was built in the 16th century and which has been restored and rebuilt several times since.