Where to buy property in Upper Nomandy, France 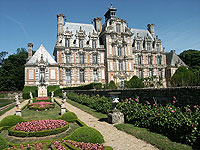 Upper Normandy (Haute-Normandie) is a region based mainly on agriculture and tourism. It is also home to the second largest French port, Le Havre. Another major port found in the region is Dieppe. It is an attractive port, regularly frequented by day-trippers from Great Britain and elsewhere. On Saturdays, Dieppe has a popular street market that focuses on seafood.

There are a number of charming seaside resorts in Upper Normandy, most notably Étretat, with its white cliffs, as well as Le Tréport, Fécamp, and St-Valéry-en-Caux.

The regional capital, Rouen, is a seaport, France’s fifth largest. Due to its port and the city's location close to Paris, Rouen is a major industrial centre, turning out an incredible variety of products from medicine to petrochemicals to textiles.

The city is home to the famous Rouen Cathedral, immortalized in a series of Impressionist paintings by Monet.