Where to buy property in Upper Austria, Austria 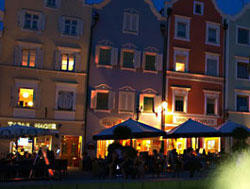 Upper Austria (Oberosterreich), with its gorgeous scenery consisting of mountains, lakes, and valleys, has some of the most quintessentially Austrian landscape in the country. The province is traversed by the Danube River, giving it many fertile plains that produce a rich agricultural bounty. The countryside retains a pastoral atmosphere and is dotted with picturesque old towns and historic abbeys.

The climate of Upper Austria is largely moderate, although it is harsher and more alpine in its northern part. The province tends to have cold winters, although the snowfall is rarely deep. The conditions here closely mirror those of southern Germany. Milder climate conditions are enjoyed in the Salzkammergut area, however.

The mountainous area of Dachstein is a great place to enjoy outdoor activities such as hiking, mountaineering, and skiing. The ski resorts found here are not nearly as expensive as the more developed resort areas in Tyrol, Land Salzburg, or Vorarlberg. The district is also home to one of Upper Austria's most popular natural attractions, the wondrous Dachstein Caves.

In the summertime, visitors are drawn to the Salzkammergut area and its beautiful lakes, such as Attersee, the largest lake in the Austrian Alps. Other major lakes in this area include Mondsee (Moon Lake) and Wolfgangsee (St. Wolfgang). Also found in Salzkammergut is Bad Ischl, a popular spa town that once served as the Emperor Franz Josef's summer residence.

Upper Austria's capital, Linz is the third largest city of Austria. This historic but highly industrial city is also Austria's second largest economic area. A city on the banks of the Danube, Linz is served by the biggest port found along that great river.

Linz is very urban and modern - it's the kind of city where wireless Internet is available almost everywhere. But Linz does have a charming historic centre, the Altstadt, though it admittedly lacks some of the fairytale quality of similar old districts in Graz or Salzburg. Linz does have some truly beautiful spots like the sprawling Hauptplatz, a majestic square surrounded by impressive Baroque and Rococo architecture.

The city has come to be known as a major cultural hub. Linz has a flourishing music and arts scene fostered by its concert halls (such as the Brucknerhaus) and modern art galleries (notably the Lentos Art Museum). Cultural events such as the Ars Electronica Festival and the Bruckner Festival draw many visitors each year. The Anton Bruckner Private University for Music, Drama, and Dance is located in Linz. In 2009, Linz shares the title of "European Capital of Culture" with the city of Vilnius, Lithuania.

Linz is an important centre of education in Austria, and is home to the Johannes Kepler University, the University of Arts and Industrial Design Linz, and the Anton Bruckner Private University. Also found here is the Linz International School Auhof (LISA), an International Baccalaureate school where English is the main language of instruction.

Nightlife in the city of Linz is very active, featuring numerous pubs and bars as well as swanky nightclubs. The part of town known as the "Bermuda Triangle" is considered party central, and bars in this area stay open until the wee hours.

The city's main shopping thoroughfare is Landstrasse, a mostly pedestrian avenue lined with a variety of boutiques. The city centre has three major shopping centres Arkade Taubenmarkt, Atrium City Centre, and Passage Linz. The Altstadt itself is an attractive marketplace, its surrounding pedestrian zone packed with craft stores, galleries, flower stalls, and a variety of other shops and cafes.

Linz's most notable residential development is solar City Pichling, a "solar village" made up of 1,300 households set on the outskirts of Linz. The solar City residential project was conceived as combining high-quality living with an environmentally-friendly focus. Its homes and buildings were made in accordance with low energy use and efficient waste disposal standards. The roofs of houses are equipped with solar cells that store energy for electricity and indoor heating. The solar City development includes a school, bank, supermarket, coffeehouse, shops, parks, and a tram line to the Linz city centre.