Where to buy property in Tripura, India 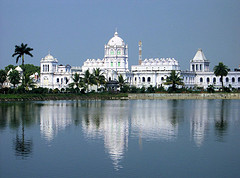 Tripura is a tiny, hilly, landlocked state surrounded by Bangladesh, which achieved statehood in 1972. It has a beautiful landscape and a tropical climate. Most of Tripura's inhabitants are Hindu, and 70% are Bengalis, as a result of mass migration of Hindu Bengalis from Bangladesh. Bengalis and Tripuris and tribals all tend to be adherents of an animist-Shaktism hybrid of Hinduism, the state religion under the Tripuri kings.

The present King of Tripura, who acceded to the throne in 2004, is popularly known by the media as "King Cool". He is chairman of the Royal Heritage Hotel, recipient of the NE TV Entrepreneur of the Year Award 2004, does many charity works, and is one of India's most eligible bachelors.

Music is especially important in the daily lives and celebrations of Tripura's tribal folk. Wood, bamboo, and woven handicrafts are skillfully wrought.

Tripura's capital Agartala is a tranquil town. Agartala was originally founded by the Manikya dynasty rulers. Its most important landmark is the vast Tripura Palace, now the seat of the state's Legislative Assembly.

The city's population has increased rapidly in recent years. While the main downtown section is well-maintained, much of the city has become crowded and dirty.