Where to buy property in Treptow-Kopenick, Germany 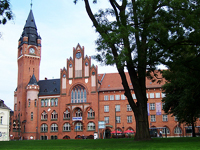 Treptow-Kopenik is Berlin's biggest borough, and has the city's lowest population density. About 75% of the borough is green spaces or water. The Spree River runs through, as does the M�ggelsee, the largest lake in Berlin. It also has Berlin's most sizeable forest, and is the location of Berlin's highest peak, the M�ggelberge.

It is a good area for families looking for a peaceful, country-like atmosphere. The southeastern portion has a more rural charm, while the northern end is more urbanised.

Also of interest is the baroque-style K�penick Palace, Berlin's only palace on water, and the Andersonsches Palais, built in 1750. In the old town there's a historic castle, the K�penicker Schloss.

Treptow-K�penik was once an important industrial area. Industry declined some time ago, but recently have there been attempts to develop new science and technology-related industries. Some Humboldt University research institutes are in this borough.

Found here are Treptower Park, and the Treptowers complex, and some housing developments to the north of the park. The Treptower Allianz, Berlin's tallest office building, lies on the banks of the Spree River.

Housing here consists mainly of multi-family buildings in the typical late-1890s style, with a principal building in front and a little annex in the back. This area's main cultural events venue is the Treptow ARENA, housed in a 1920s bus depot overlooking the Spree.

Pl�nterwald is a newly developed district that was built in 1997. Housing here is a mix of new and old. There is also a park located by the Spree River in thi district.

Baumschulenweg bordered West Berlin during the partition period. There are some 1920s residential developments in the north, around the Baumschulenstra�e. Heidekampweg is home to 1960s housing developments.

Johannisthal has a strong tradition of aircraft industry. It has many 1950s pre-fabricated concrete residential buildings.

The Johannisthal-Adlershof airfield was built in Adlersdorf in 1909. Many high-tech companies are now located here. It is home to a science and technology park housing about 400 companies and six research facilities, with over 12,000 employees. The park includes a residential complex with shops, restaurants, hotels, and a vast garden.

Niedersch�neweide is a mixed residential and industrial area on the banks of the River Spree. It was established on grassland drained during the 1800s. It now has renovated homes, new recreational facilities, and a great market area. An old industrial space between Hasselwerder Street and the Spree is to be renovated as well.

Bohnsdorf grew out of a village square, with a significant historic baroque church.

The famous Berlin architect Bruno Taut built Falkenberg Garden City here in 1916, applying the garden city concept he learned in England. Strikingly, the buildings are painted in bright, contrasting colour schemes, and it earned the nickname the paintbox colony. It is a gentle green, low-rise development, and has been spruced up recently. It has been nominated, among 6 other modernist sites in Berlin, as a candidate for inclusion as a UNESCO World Heritage Site.

Altglienicke is a densely developed area with little green space. It originally provided the city with its water supply. Its old town centre dates back to 1890. Housing for workers was constructed in the 1930s. There is also a vast pre-fabricated 1980s concrete residential development. After re-unification, more attractive modern buildings were built. One of the major landmarks in this modern style is the campanile building.

Since 1995, attractive residential developments have been built in Obersch�neweide, which was originally an electronics industry zone. The industry deteriorated under socialism, but more recently the area has been populated by a number of institutes of higher education. The Halls of Berlin, a cluster of galleries and museums, is housed in the abandoned industrial buildings.

K�penick, one of the borough's principal residential areas, boasts a lovely, well-preserved old town. The centre of this historic old town has earned the moniker City on the Water for its location on an island at the confluence of the Spree and the Dahme waterways. There's an elegant housing area to the east of this old town centre boasting fine villas and other homes, and served by restaurants, shops, service centres, cultural centres, and the district's administrative institutions.

Many Friedrichshagen homes overlook lake Grosser M�ggelsee. The area along the lake's northern shore is not large, but is densely populated. There are many recently restored historic buildings in the B�lschestra�e area, which now boasts some of Berlin's most exclusive restaurants and stores.

Rahnsdorf grew out of a fishing village by the M�ggelsee. It has kept much of its charming, circa-1890s village character, with some well-preserved architecture in its historic old village centre.

It has a beach area which has been popular for decades. In the early 20th century, many fine villas and country houses were built in this district, and in the mid-20th century many lovely homes were built on the waterfront.

A small settlement overlooking the Langer See is located in this district, known as the site of the sailing, rowing and canoeing events of the 1936 Olympics.

M�ggelheim is a small residential zone in the midst of the greenery, to the south of the Grosser M�ggelsee. It used to be a working class district. Cyclists and skaters enjoy using the bicycle paths along the southern shore of the lake.

Schm�ckwitz has plenty of green spaces. It is largely rural and has plenty of camping and summer recreation facilities. Some historic buildings dating back to the start of the 19th century are preserved in Alt Schm�ckwitz.