Where to buy property in Thuringia, Germany 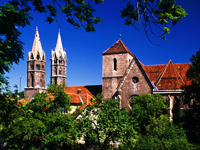 Martin Luther, Bach, Schiller and Goethe are few famous names who lived and worked in some of the equally famous towns of Thuringia� - Jena, Erfurt and Weimar.

The state of Thuringia is rich in natural beauty and cultural treasures. Its idyllic countryside is dotted with impressive castles and palaces. The tranquil setting makes its spas and resorts all the more relaxing. Some particularly romantic sites are the Thuringian Forest and the Kyffh�user Hills. The reservoirs of the Upper Saale Valley form what is known as the Thuringian Sea, a favourite holiday getaway.

A traditionally agricultural region, Thuringia has lush farmlands, among which lie historic towns and villages. Its capital, Erfurt was founded by St. Boniface in 742 and became a prosperous medieval trade and academic centre. It has the best-preserved medieval town centre in Germany, with faithfully restored Renaissance as well as medieval architecture.

Eisenach is where the famous composer Bach was born.

The town of Jena was a haven of intellectuals in the 18th-19th centuries, including Schiller, Hegel, and Goethe. It is also famous for its heatproof glass and has a fascinating Optical Museum which houses the oldest planetarium in the world. Gera, the birthplace of German Expressionist painter Otto Dix, boasts an art gallery with 400 works from all of Dix's artistic periods as well as a uniform 16th century town centre and an amazing underground network of caves used as beer cellars.

Some of the famous landmarks of this state include the Drei Gleichen, or three castles, which lie between Arnstadt and Gotha.� Two other famous castles are Runneburg Castle in Weissensee and the UNESCO World Heritage-listed Wartburg Castle, St. Elisabeth's home and the place where Martin Luther translated the New Testament. Beichlingen Palace is another famous historic site. The famous Kyffh�user monument with its statues of Kaiser Wilhelm I and Emperor Barbarossa is an 81 metre high structure with glorious panoramic view from the top of its tower of the wild landscape of this scenic state.