Where to buy property in Szabolcs-Szatmar-Bereg, Hungary 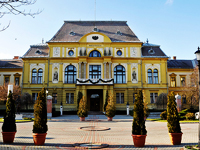 Szabolcs-Szatm�r-Bereg county borders Romania, Ukraine and Slovakia. Its capital is Ny�regyh�za.� Much of the county is covered by thick birch woods, lazy pastures and meadows as well as swampy moorlands. The moors at Csaroda, and the lakes of Ny�res and B�btava are especially valuable, due to their many rare flora and fauna.� The county is well known for plum orchards. The plums are eaten fresh, dried into prunes, or made into brandies.

The Turks were not able to conquer much of the northern parts of this area, so many places still have well-preserved relics from �rp�d's age and the Medieval Era. The Romanesque village church in Csaroda for example has wonderful paintings that date back to the 13th century, as well as 14th century gothic frescoes and 17th century wood-carvings and paintings. The Reform�tus Templom in Ny�rb�tor, with its wooden belfries and four turrets is still in great shape, as is the church in V�mosatya.

Another notable ecclesiastical structure in the county is the wattle-and-daub Calvinist church in T�kos. This shingle-roofed house of worship is as big as a large cottage.

The town of M�riap�cs is a Catholic place of pilgrimate, due to a 17th century miracle in which a picture of the Virgin Mary in the baroque-style church supposedly shed tears.

The 20th century Hungarian poet Gyula Kr�dy is from this region. His poetry speaks of the dreamy landscapes of his home land, the opulent mansions of the nobility, and the tiny churches reflecting the people's faith.