Where to buy property in Sud, Germany 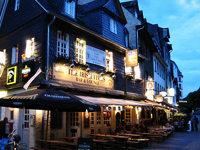 Sachsenhausen is a traditional district, one of Frankfurt's most popular nightlife area with many cider pubs and other traditional-style establishments. It has something of a Mediterranean atmosphere. It has a big population, with many up-and-coming young entrepreneurs.

Its architecture is quite diverse it has the oldest half-timbered house in Frankfurt, and also Frankfurt's most stunning residential high-rise buildings. The Museumsufer, or embankment, has 11 well-known museums, lined up like a string of pearls on both sides of the Main. There are around 50 other museums and exhibition halls, in the immediate vicinity or in a central location.

Sachsenhausen has some magnificent villas. There are old houses around Schweizer Platz, and people feel transported back in time with the cobblestoned narrow streets, and the timber half-frame houses. Lerchesberg is home to some of Frankfurt's upper crust.

Lots of places here offer the traditional cider wine (Eplewoi) pubs, where people sit on long benches drinking cider and eating traditional fare like beef in green sauce, hand cheese or simply one of the famous pretzels from mobile vendors. There are also some trendy little night clubs.

Schweizer Platz is a good place to go for international cuisine. Schweizerstra�e, the main road, has all kinds of establishments, including food stores, boutiques, bookshops, flower shops, and eateries. There is a flea market here too, on Saturday mornings. The park by the river is a pleasant place to relax in the summer.

Flughafen, where Frankfurt Airport is located, has the lowest and least dense population of any district in Frankfurt, with only 341 inhabitants, despite being the second largest district, next to Sachsenhausen.

It also has its own hospital, plenty of restaurants, numerous hotels, and places of worship. Surrounding this affluent district is Frankfurt City Forest.

Oberrad is a tranquil, very suburban district, with many gardens. It was almost completely destroyed by World War II bombings. It is 4 km south of the city centre, easy to reach from Oberrad by bus or train.

Niederrad is known mainly for being the site of the Waldstadion, the city's main sports arena. Just 3 km from the centre of Frankfurt, it is well-connected to all parts of the city by bus and railway lines.