Where to buy property in Southern Federal District, Russia 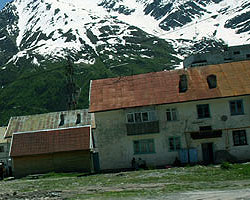 The Southern Federal District is actually located more to the southwest, sandwiched between the Ukraine and Kazakhstan. With a population of nearly 23 million, it has the second largest population among Russia's districts.

This district has 13 regions which may be classed into two types. The first group consists of the more prosperous areas like Astrakhan, Volgograd, Rostov, Krasnodar and Stavropol.

The second group is composed of the republics of Adygea, Ingushetia, Kabardino Balkaria, Kalmykia, Karachayevo Cherkessia, North Osetia-Alania, and Chechnya, which lag much behind in socio-economic status. This is partly because the Northern Caucasus is in the midst of political turmoil, so is less attractive to investors. In particular, Chechnya's struggle for independence which has led to fighting between separatists and Russian forces over the years, the deaths of tens of thousands in Chechnya (the estimates of the casualties of war vary wildly) and terrorist attacks in Russia has claimed the international spotlight. Despite signs of rebuilding in the war-torn capital of Grozny, violence still occurs, including the recent murder of a prominent activist for Chechen rights.

The biggest cities in this district are Rostov-on-Don and Volgograd, each with a steadily growing population of over a million. Each is home to a large prestigious museum. In the first is the Rostov Kremlin, a museum of church antiquities housed in a splendid 17th century bishop's palace. Of a totally different character is the Volgograd State Panoramic Museum, which showcases art and artefacts relating to the major World War II battle in Russian territory, the Battle of Stalingrad.

The south of this district is more rural than the north. But the area of Sochi in the south is fast growing into a typical big city.

This territory consists of the western side of the North Caucasus and some of the northern slopes of Caucasus Major. Its landscape is quite diverse. The southern third, by the sea, has a protected forest area.

Krasnodar Krai enjoys a Mediterranean climate, except in the south-east where the climate is tropical. The rest of the region is ranged on the Pontic Steppe and has a continental climate. The Kuban River forms a border between these two sections.

The largest lake in this area is in Abrau-Dyurso, a wine-producing region on the shores of the Black Sea. Abrau-Dyurso's award-winning wines have received acclaim from international wine bodies.

Its major city is Novorossiysk, one of Russia's 12 Hero Cities, an appellation bestowed by the Soviet Union on cities that saw great action and whose people displayed great courage during World War II. The city earned the honour after resisting a German invasion in 1942. The Germans had hoped to control the city's seaport, which it would have used for its supply ships. Today, the Port of Novorossiysk on Tsemes Bay is a major Black Sea port that operates all year round (the bay is ice-free). There is also a naval base here. Novorossiysk is also a major centre of the country's cement industry.

Sochi is unique in Russia for having a subtropical landscape. It has been a fashionable resort city for many years, and was favoured by Stalin, who had a dacha (vacation home) here. His old study can still be viewed by the public. Many grand Neoclassical buildings were built in Sochi in those days, and the area continued to be developed until the dissolution of the Soviet Union.

Ever since this city began preparations to host the 2014 Winter Olympics, its real estate market has grown in attractiveness, second only to Moscow in popularity. Sochi has the unusual claim of being the longest city in Europe, with its longer side at a length of 145 kilometres. It is spread along the coast of the Black Sea, backed by the imposing snow-capped Caucasus Mountains.

Sochi became the summer capital of Russia after the Crimean Peninsula, a popular resort area, separated from Russia in 1954. The opulent structures from the Stalinist years add to the city's fascination.

The main draw of Sochi is its natural beauty its pebble and sand beaches, overlooked by majestic peaks and lush subtropical greenery, its many parks. Sochinsky National Park, in the Caucasus, is home to more than 30,000 plant species and hundreds of bird and animal species from Europe and Asia.

The city's infrastructure is being developed in conjunction with the preparation for the 2014 Winter Games, and a Light Metro system will be completed by then. Even the National Park is undergoing rehabilitation it is being reforested in time for the Games. These improvements are making the city even more attractive to buyers of investment properties.