Where to buy property in South Holland, Netherlands 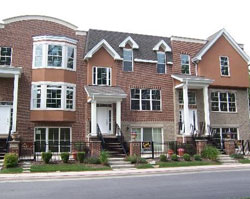 The Netherlands is often erroneously called Holland, but the name actually refers to two of its larger provinces. One of these, South Holland, gently curves out to the North Sea. The southern part of the province is broken up into seven islands separated only by rivers or canals in the Rhine-Meuse Delta.

South Holland (or Zuid-Holland, in Dutch) has a population of 3.5 million and is the most densely populated Dutch province. Most residents live in large urban centres, the chief of which is The Hague, South Holland’s provincial capital.

A centre of international diplomacy, The Hague is a vibrant, cosmopolitan city that sits on the coast of the North Sea. It has famous coastal areas, including the popular resort town of Scheveningen, and large urban districts rich in history and culture. It is also the seat of Dutch government and the Queen’s official residence. South Holland is also the most heavily industrialized province, specializing in the fast-growing high-tech services sector.

Yet South Holland is a vista of flat, green countryside, rolling meadows, rivers and streams, and picturesque small towns characterized by well-preserved old houses, tree-lined streets, narrow alleys, canals and bridges, and the parks and gardens that the Dutch are particularly fond of.

South Holland has a slightly higher rate of unemployment than the Dutch average, but at the same time a faster growing GDP per capita. 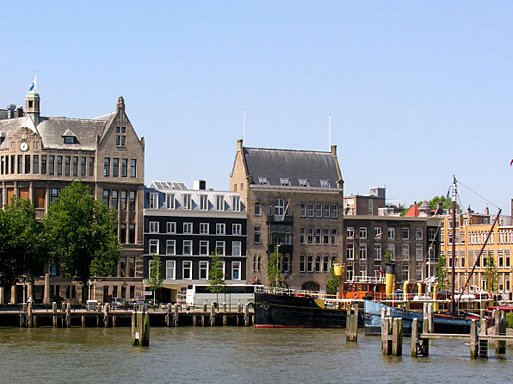 Rotterdam is the largest city in South Holland. More than half a million people live here, and the native Dutch make up only a slight majority. The largest ethnic minorities in the city are Surinamese, Turkish and Moroccan. Much of the city is below sea level, and protected from the waters by massive dikes. The New Meuse (Nieuwe Maas) River goes through the city.

Rotterdam is sometimes known as a city without a centre, as its historical centre was destroyed by bombs in World War II. Maybe this is why Rotterdam has become a focus for ambitious modern architectural projects. These include the Montevideo, the highest residential building in the Netherlands, composed of a series of intersecting blocks suspended over the Wilhelmina Quay; the glass-covered slabs of the Gebouw Delftse Poort office complex, on which the sky is reflected; the striking Erasmus Bridge with its swanlike pylon; and the attention-grabbing Kubuswoningen—a series of cube houses placed atop pylons. Each house has three floors, and has been tilted so that it is connected to its pylon by a vertex instead of a side. Rotterdam’s dynamic modern skyline has earned it the nickname "Manhattan on the Meuse".

Some of the most attractive residences in central Rotterdam are luxury apartments overlooking the Meuse. Those who prefer quieter surroundings live in the greener suburbs on the city’s outskirts.

Rotterdam’s port is the largest in Europe: 10,500 hectares of shipyards, warehouses, storage areas and docks stretched over 40 kilometres. It used to be the world's largest port, until Shanghai took the title in 2004.

Rotterdam may not be as romantic and vibrant as Amsterdam, or as highly cultured as The Hague, but it has great architecture and an energetic nightlife.