Where to buy property in Shenzhen, China 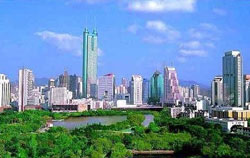 Over the last two decades, the once small border town of Shenzhen has experienced a massive boom, transforming it into a pulsing, restless metropolis. The Shenzhen Special Economic Zone was founded in the 1980s a city open to foreign investment and built practically from the ground up by many former Hong Kong residents. Most Chinese moving to Guandong province are heading to Shenzhen, to seize a multitude of new opportunities. Shenzhen’s infrastructure has been vastly improved, and it is becoming one of the most modern cities in the region.

Shenzhen has long had a bad reputation as a practically lawless cowboy town, with a disreputable stock exchange, an over-active nightlife, a thriving black market selling pirated versions of every product you can think of, and a vulgar glitziness brought by new money. The city’s theme parks, for one, are testament to the latter.

Windows of the World, for example, has replicas of over 130 well-known sites, from the Eiffel Tower to Egypt’s pyramids. You can visit them all in less than an hour, and without needing a passport! For while Shenzhen lacks the natural scenery and historical allure of other great cities in China, it has compensated by building flashy, attention-getting attractions.

The weather in Shenzhen is generally pleasant. Though occasionally hit by typhoons during its hot but wet summer, the temperature hardly reaches over 35 degrees Celsius.