Where to buy property in Schleswig Holstein, Germany 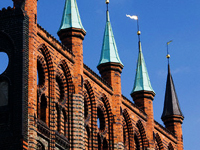 The North Sea and Baltic coasts of Schleswig-Holstein are beautiful, with tranquil beaches and pleasant coastal towns and villages. The Baltic coast region is the grander of the two, with elegant manor houses and a castle surrounded by a moat in the former royal town of Gl�cksburg. Its fjords and cliffs provide a sweeping, romantic scenery. There's a hilly nature reserve with numerous lakes exuding a Swiss aura between Kiel Bay and L�beck Bay. The region is good for fishing. The rough and windy North Sea coast is ideal for watersports. The sands are white, giving way to greenery further inland. The region includes the sunny North Friesian islands - Heligoland is especially popular, with its unique creatures and vegetation, fresh lobster, and great duty-free shopping.

The state's attractions tend to centre on sea-faring. Various water vessels may be seen in the ports. Most festivals involve water sports, such as the world-famous regatta in the state capital of Kiel.

Kiel is a sparkling city. Bustling with a university, naval base, important harbour and Germany's largest passenger port, it provides a wonderful blend of maritime lifestyle, urban charm, culture and history. Kiel Week Regatta is the world's leading sailing event and northern Europe's biggest summer festival.� The town hall in the old town has a 67 m high tower where one can catch a wonderful view of the Fjord, the city and the marina.

L�beck, a UNESCO world heritage site, boasts well-preserved medieval Gothic red-brick architecture in its old town. In fact every step you take in L�beck, the former "Queen of the Hanseatic League", reminds you of its great past as a Free Imperial and Hanseatic Town.� It is surrounded by water, and� the old town remained intact as an example of medieval redbrick Gothic architecture with its proud Patrician town houses and brick Gothic churches. Close to Luebeck is a chic seaside resort called Travem�nde.

Flensburg is very scenic and sits on a hill providing a view to the sea from every angle. It is on the border with Denmark. Its old city is quaint with very picturesque facades and delightful shops. The equally pretty town of Friedrichstadt with its many canals is unique in having architecture with a Dutch character, having been established in 1621 by Duke Friedrich III and Dutch migrants.