Where to buy property in Sarawak, Malaysia 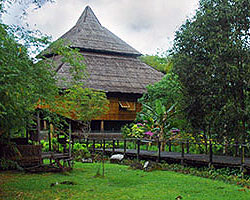 Sarawak is Malaysia's biggest state, but its major claim to fame is that it has the world's oldest rainforests, perhaps 180 million years old, older than the Amazon. The Sarawak rainforest has over 28,000 types of fauna and flora, and is home to one of the world's few remaining hunter-gatherer tribes, the Penan, as well as to the friendly Iban, who have renounced the practice of headhunting, but will tell you exactly how they used to cut off heads, with great glee.

Called "Land of Many Rivers", Sarawak has 20 river systems of at least a hundred kilometres long. The Batang Rajang is Malaysia's longest river. For 563 kilometres it snakes through a third of the state's land area.

The state is also known as the "Land of the Hornbills", after its national bird, which the Iban revere as a divine messenger.

The Gunung Mulu National Park hosts around 52,000 hectares of the primeval jungle, as well as the world's most widespread cave system. Its Clearwater Cave is the largest natural enclosure in the world, which could comfortably fit many jumbo jets. It also has the world's biggest cave passage, Deer Cave, which houses 12 species of bats and other cave-loving plants and animals.

The state is heavily forested, but it has also been heavily logged for decades. Half its inhabitants come from various indigenous tribes. No race is clearly dominant, although there are a significant number of Chinese and few Indians. Most do not practice Islam.

Yet for all its primal wildness and rich biodiversity, Sarawak was one of the earliest states to industrialise. Oil was first discovered in the country in the coastal town of Miri, near the Sarawak-Brunei border. In 1910, oil companies began coming to the town to exploit the resource. Miri continues to thrive, with new discoveries of more offshore reserves. The Sarawak government was the first among Malaysian states to embrace the Internet, making e-governance possible beginning in 1995. It also has Malaysia's first e-library, the Sarawak State Library, whose collection is fully online.

Sarawak was ruled for 105 years by British "white rajahs" three members of the Brooke family, beginning with the British adventurer James Brooke, who brokered a peace agreement between warring locals and the Sultan of Brunei. For his efforts (and after some threatening), he was awarded the title Raja of Sarawak. �He was succeeded by his nephew Charles, who in turn was followed by his son Vyner, the last white rajah.

A lasting reminder of the White Rajahs is the Sarawak State Museum, whose old building was built in the late 19th century reflecting Victorian-era styles.

Kuching, the capital of Sarawak, is a charming city on the Sarawak River. It is the centre of Malaysia's 4th largest metropolitan area, with a total population of around 1 million.

Its large hotels and commercial centres are situated near the Kuching Waterfront, a popular esplanade along the river. Opposite the waterfront are old shops selling antique items and craft. Another major commercial area in the city is the shopping street Jalan Padungan.

On the banks of the river is Fort Margherita, built to guard against pirates and named after Rajah Charles wife, Margaret. It is now within the grounds of the police academy and houses a police museum.

One of Sarawak's most important religious monuments is also in Kuching: the Tua Pek Kong Temple, and its 7-storey pagoda is one of the state's most recognizable landmarks.

Kuching has three major green areas: the Semenggoh Nature Reserve, which has a Wildlife Rehabilitation Centre that cares for wild animals that had been captured and later confiscated by the government; Bako National Park, a small nature reserve on the edge of the Muara Tebas peninsula that is also the state's oldest national park, and Kuching Wetlands National Park, with its kilometres of mangrove swamps and creeks providing a breeding ground for many fish and crustacean species and a home for several species of wildlife, including the proboscis monkey.

Kuching proper's population of 560,000 is made up of Chinese, Malays and, in lesser numbers, Ibans and other groups. Interethnic marriages are common.

Kuching is the natural starting-point for exploring Sarawak.