Where to buy property in Santiago Metropolitan, Chile 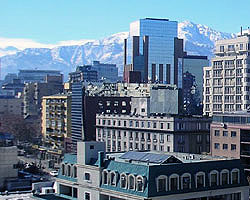 The Santiago Metropolitan Region (RMS) is suitably in the centre of the country, as it is also the political, economic and cultural centre of Chile. Seven million of the country's total population of 17 million live here.

The RMS is the only one of Chile's regions not to have a coast, as part of its northern neighbor Valparaiso curves between it and the Pacific Ocean. The Andes range borders it on the other side. It is the smallest of Chile's 15 regions, but the most populated and the most prosperous.

The region is situated in a basin between the Andes range in the east and an offshoot of the Andes, the Cordillera de la Costa (Chilean Coast Range) in the west. Its climate is characterized as Mediterranean, with warm-to-hot summers and cool-to-cold winters.

Being on the rim of the Pacific tectonic plate, Chile is a seismically active area, and the RMS has been the site of some of the country's worst earthquakes. The region also has several volcanoes, three of which are active.

The Santiago Metropolitan Region is made up of six provinces, the most important of which is Santiago, where the capital is located. The Province of Santiago consists of 32 of the 37 communes of the Greater Santiago area (which consists of the province and some areas in the neighbouring provinces), including Santiago City.