Where to buy property in San Juan (Capital), Puerto Rico 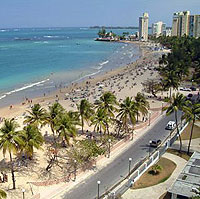 San Juan (a prime area) is the capital and largest city of Puerto Rico. Also known as The Walled City, it is the oldest city under U.S. jurisdiction, having been founded in 1521. It is also one of the major ports and tourist resorts in the West Indies.

San Juan is also the nation's financial capital, with many U.S. banks and other financial companies having offices in the city. Several major hotels have been built to accommodate the large influx of tourists to the region.

While a progressive and modern city, San Juan probably has the greatest number of tourist attractions and preserved historic landmarks in Puerto Rico.

San Juan is a city of beautiful plazas, some of which date back to Spanish colonial times. Plaza de San Jose is noted for its bronze statue of the city's founder, Juan Ponce de León. The statue was made from British cannons that were seized by the Spaniards in 1797. Plaza de Quinto Centenario has a black granite and ceramics sculpture that commemorates the 500th anniversary of Columbus' discovery of the New World. The Plaza de Colon has a statue of the explorer, and bronze tablets at its pedestal documents his key achievements. Plaza de Hostos is the city's market square, with its artisan stalls and snack stands. Plazuela de la Rogativa features a modern statue of a procession of religious women. Following their failed attack on the city, the British Navy built a naval blockade to starve the citizens into surrendering. With no rescue in sight from the nearby Spanish garrisons, the governor ordered the holding of a rogativa, a prayer procession asking for divine intervention. The praying women carrying torches were mistaken by the British for Spanish reinforcements and fled.

San Juan is also noted for forts that defended the city. These include the great fort of El Morro, the Castillo de San Cristobal, Fuerte San Geronimo, and the Santa Elena Battery. The city also has historic churches and museums in abundance.

San Juan is not devoid of natural attractions. It has one of the biggest and best natural harbours in the Caribbean. The San Juan Beach and Resort is a popular recreational area. The Piñones Reserve is a protected sub-tropical moist forest of mangroves and sea turtle nesting sites.

The middle- and upper-class community of El Condado is located east of Old San Juan. It is a quaint oceanfront neighbourhood with trees, well-paved pedestrian lanes, and streetcars.

Initial development of El Condado began in 1908 by noted American industrialists and founders of the Puerto Rico Telephone Company, Hernan and Sosthenes Behn. Much of the neighbourhood's growth is attributed to the streetcar line that was built within the community. By the first few decades in the 20th century, prominent families began buying property here. The Behn brothers built a home in the community and Puente Dos Hermanos, a bridge that honours their contributions to the country. Puente Dos Hermanos was constructed to accommodate the electric streetcars that linked El Condado and Old San Juan. Another notable property is the summer home of the Vanderbilts, which has been converted into the Condado Plaza Luxury Hotel. Ashford Avenue was named after prominent resident Dr. Bailey Ashford. In recent years, his home has been remodelled with plans of its being converted into a museum.

Because of the influx of tourists into El Condado in the last several decades, a number of hotels have been constructed in line with the government's Operation Bootstrap. Among these are the Caribe Hilton and the La Concha hotel chain. One of the new developments in the area is the Trump Condado.

High-fashion boutiques have opened in El Condado, along with restaurants, shops and night clubs. Since it is a prime residential area, many families have built homes or bought apartments and condominium units here. El Condado has also developed a reputation as a gay village.

Despite property values being very expensive in El Condado, potential buyers continue to flock to the community. In recent years, however, traffic congestion and high noise levels from nightclubs and other attractions have become a bother to residents. Infrastructure projects are in the works to improve traffic flow through the improvement of bridges and the creation of a public parks system. These improvements are expected to jack up property prices even higher.

Miramar is situated near Old San Juan and has spectacular views of the sea. It is an exclusive middle- to upper-class residential community. Unlike El Condado, Miramar is a quiet neighbourhood, shaded by large trees. There are a number of historical residences done in the Prairie School architectural style here. Because it is still being developed, Miramar has been designated a historical district in order to protect these properties.

Places of interest in the community include an air traffic control tower, the Puerto Rico Conservatory of Music and Academia del Perpetuo Socorro. Noted alumni from the Academia are former Governor Pedro Rossello and Hollywood actors Raul Julia and Benicio del Toro.