Where to buy property in Saint Petersburg, Russia 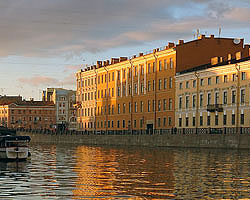 Named after Peter the Great, St Petersburg was officially Russia's capital for more than two centuries after it was founded by Tsar Peter I in 1703, and is still often called the northern capital of Russia. The large Neva River flows through the city.

St Petersburg's historic centre is classified a UNESCO World Heritage Site. The city's examples of historic, mainly Petrine Baroque (the more streamlined style of Baroque favoured by the tsar and built during his time) and Neoclassical architecture are remarkably well-preserved, despite some demolition perpetrated by the Bolsheviks.

Glorious palaces with vast landscaped grounds, built in the heyday of royalty and aristocracy, are found not only in the historic centre but in the outlying suburbs as well. Some have been made museums open to the public. The splendid grounds of Peter's summer residence, the Letniy Dvorets, have become an especially popular public park, the Summer Garden. The house itself is now a museum.

At 122.5 metres, the Cathedral of Saints Peter and Paul is the city's second tallest structure. So far, the traditional cityscape has not been marred by skyscrapers though the St Petersburg TV Tower looms 310 metres high over the Neva's Ushakovskaya Embankment but there are controversial plans to build a 396-metre-high office building, the Okhta Centre, on the banks of the Neva's tributary the Okhta River for Russia's giant gas company, Gazprom.

The city boasts over 200 museums, the most famous of which are the Russian Museum in the city's Arts Centre and the great Hermitage, which is right in the heart of the historic centre. It also has as many as 2,000 libraries, the most extensive of which are the Russian National and the Academy of Science Libraries. The Hermitage has the world's largest collection of paintings, and counts more than 3 million items in its keeping.

St Petersburg has been especially famous for its beautiful and vibrant theatres ever since Peter's sister founded the first one in 1709. There are now more than 80 theatres in St Petersburg; among them are the famous Mariinsky Ballet and Opera Theatre, the Tovstonogov Bolshoi Drama Theatre, and the Maly Drama Theatre which is known as the Theatre of Europe. One of the oldest circuses in Russia can be found here as well. Numerous galleries, cinemas and other cultural institutions are also found in this vibrant city.

Being the Russian city closest to its European neighbours, and being founded by a tsar who was pro-Western and a great moderniser, St Petersburg has been called the most Western city of Russia. Many foreign consulates and international companies are based here. The carefully planned historic centre is the social and economic hub of the city.

Built on a group of 42 islands, St Petersburg is also considered the Venice of the north. The comparison is apt, as not only does it have many waterways flowing through it with 580-plus bridges spanning them, the city was also a centre of naval power in the past. The landscape of the city is marked by many rivers and lakes, plus marshlands.

St Petersburg experiences a great amount of rainfall. It is dry in summer and temperatures can reach as high as 35 degrees Celsius, but summers are short, while winters are long, though with many spells of warmth.

Most city residents live in apartments. The apartments from the 1980s to the 1990s are rather drab, but those from the 1930s to the 1950s, the time of Stalin, make for more attractive investment properties, being solidly built and usually boasting parquet flooring and three-metre-high ceilings.

Though the city retains a veneer of gracious tradition, modernity has arrived. St. Petersburg is Russia's rock music and punk culture centre, as well as its classical ballet centre. It has increasing street crime, including white supremacist groups that have been known to attack foreigners. In the late 1990s it became known as the organised crime capital of Russia. Another problem is the environment many areas of the city are plagued by the pollution caused by the industrial sectors and the many vehicles in the street.

Most residents, wisely perhaps, live not in the city proper but in outlying suburbs. They rely on St Petersburg's modern metro system and commute to where the action is.

Foreigners should find the city easy to navigate, as it is well-organised. English is increasingly being used on street signs as well as Cyrillic. But despite its occasional concessions to globalization, St Petersburg has unmistakably retained its traditional Russian character.

The city of St Petersburg has 18 administrative divisions. It is the administrative centre of Leningrad Oblast as well as of the North-Western Federal District.