Where to buy property in Saba, Netherlands Antilles

Cone-shaped Saba is Netherlands Antilles’ smallest island, dominated by Mount Scenery. The dormant volcano is the highest point in the entire Kingdom of the Netherlands.

This small, rocky island was once a favourite hideaway of pirates. Two notorious buccaneers who purportedly walked this land were Sir Henry Morgan and Hiram Breakes, known for the famous quotation "Dead men tell no tales."

Saba’s terrain made it difficult for early settlers to reach other parts of the island. The man who took on the challenge was Josephus Lambert Hassell, a Saba native whose only formal education in engineering was through a correspondence course. Hassell designed and supervised what scoffers called "the road that could not be built." Centuries later, Hassell's The Road is the only major thoroughfare in Saba.

Originally known as the home of shoemakers, the island is now famous for its ecotourism with its many hiking trails and spectacular scuba diving spots of beautiful coral reefs, deep volcanic walls, and abundant marine life. These are protected by the Saba National Marine Park. Saba owns two hyperbaric chambers that are used during diving emergencies.

The island, despite not having beaches, is such a wondrous paradise that it was given the title "The Unspoiled Queen."

The Bottom is Saba’s administrative capital. Its true Dutch name is De Botte, meaning "The Bowl", as the valley in which it is located is surrounded by hills.

The town is particularly famous for the 800-rough hewn steps that lead from Ladder Bay to The Bottom. It was once the only way to reach the village. Other popular attractions are the Gubernatorial Mansion, Wilhelmina Park, and Wesleyan Holiness Church.

The capital is home to the Queen's Garden Resort, which offers upscale accommodations, a health spa, and a great restaurant.

Situated between Hell's Gate and St. John's is Saba's second largest village. Windwardside is noted for its cool sea breeze, which makes air conditioning unnecessary. It is where most of the tourist attractions and shopping centres on the island are located. Many hiking trails also start from here.

Windwardside is home to the Lambee's Place, the former residence of Josephus Lambert Hassell, the engineer who built The Road. Lambee's Place boasts a number of art galleries, a tourist office and a cafe.

Also found in Windwardside is the Saba Museum, housed in a 150-year-old cottage which once belonged to a Saban navy captain. Much of the furnishings inside the cottage were restored, including a four-poster bed with Saba lace draperies, a piano, map, sextants and an old rock oven in the kitchen. Saba Museum also offers exhibits of Columbian Amerindian artefacts and other memorabilia of the town's history.

The popular Cottage Club is so named for its cluster of 10 Saban-style gingerbread cottages on a cliffside, linked together by brick pathways and tropical flower gardens. It is located at the heart of Windwardside, just a short walk from a number of shops and restaurants.

Each cottage has a private balcony and deck which provide spectacular views. All are equipped with the modern amenities, including telephone and cable TV. The Cottage Club also has a natural stone pool carved out of a lush ravine. 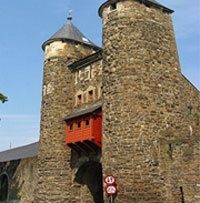 Hell's Gate is the first village one passes by when coming from Saba’s Juancho E. Yrausquin Airport, the shortest airstrip in the world. The main road snakes around the small village, which is divided into Upper Hell's Gate and Lower Hell's Gate.

Upper Hell’s Gate is home to an orchid research centre. Lower Hell's Gate is a popular hiking spot with its many trails. The North Coast Trail is located close to the old sulphur mine where hikers could still smell the stench of sulphur fumes. The trail ends at a grassy spot that provides spectacular views of the Pirate Cliffs, Green Island and the North Coast.

A prominent landmark of the village is the Holy Rosary Church on Zion Hill, built in 1962. The community centre behind the church is where the village ladies sell beautiful Saba lace and Saban Spice, a strong liquor.

There are undeveloped lands for sale in Upper Hell’s Gate, which are ideal locations for residential or commercial development. Some locations offer great ocean views.

Cove Bay is located on the northeastern side of Saba. It is not a beach as many first think it is, but a small cove with a blue pool surrounded by large boulders. The shore is made up of gray sand and small rocks.

While the cove is more popular for swimming and snorkelling, it also has an archaeological dive site where artefacts of an Arawak civilization dating back to 700 AD can be found.

Mostly residential St. John's is the smallest village in Saba. It is home to the island’s only school and a church.

There is not much to do in St. John’s, but it has two popular restaurants: Lollipop's Bar and Restaurant and Midway Bar & Restaurant. The latter specializes in goat and chicken cuisine, and offers breathtaking views of The Bottom, the Caribbean Sea and nearby hills.

Search for properties in Netherlands Antilles