Where to buy property in Saarland, Germany 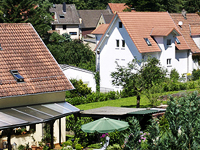 Named after the Saar River, Saarland boasts splendid scenery, with rolling hills and thick forests. More than a third of this state is woodland. The countryside of the Saargau region is covered with thousands of vines and fruit trees.

There are also many lakes and waterways that provide an excellent venue for every kind of water sport. This is also a great place for other outdoor sports, such as golf, hiking, and mountain biking. The region of St. Wendeler Land, centered on the beautiful lake Bostalsee is a particularly good place for these. Saarlouis is a favourite venue for more adventurous sports like climbing and aerosports.

Saarland is a wonderfully relaxing place with a rich culture and history, documented in its many museums. Saarbr�cken, the thousand-year-old capital city, is its cultural heart. Age-old monuments can be found in the old towns, like the late Gothic St. Wendel's Church. The spa town of Blieskastel has several fascinating Renaissance and Baroque structures, including a palace.� To the west of this town lies the Gollenstein, the biggest megalithic stone in Germany, standing 7 metres high.

The towns and cities of Saarland are lively, with a bit of Mediterranean influence, the state being near France. There is plenty of good food and places to shop, and the local festivals are delightful.

The capital of the state, Saarbruecken, is more than 1,000 years old. It has a fascinating array of museums, and a love of all things French is visible everywhere. The St. Johanner Markt square, Saarbr�cken Palace with its avant-garde centrepiece, is an unusual blend of baroque and modern styles, and is an example of the town's royal architecture.

The Ludwigskirche in the main square is regarded as one of the purest examples of a Protestant baroque church in Germany.�

Saarbruecken had a long mining and industrial history too. The Iron Age in V�lklingen lasted a full century from 1883 when the first furnace was fired up, to 1986 when the works were closed down. Now this fascinating monument to the industrial age, Voelklingen Ironworks has been declared a UNESCO World Cultural Heritage site.

Yet, it is not all furnaces here. The state is famous for its outstanding natural beauty. The region of St. Wendeler Land, centered on the beautiful lake Bostalsee is a good place for every kind of watersport as well as hiking, mountain biking and golf.� The Saar Bow is a remarkable natural feature and one of the Saarland's most beautiful scenes - a deep-set meander where the river has carved its course through the hard rock strata between Merzig and Saarburg.

The cuisine, though strongly influenced by the French, has retained some distinctive German treats, the Lyoner sausage comes from here.� Anyone visiting should sample the national dish of Schwenker - marinated meat grilled over a beechwood fire, with Dibbelabbes (grated raw potato, dried meat and leeks cooked slowly in a pot and served with apple sauce) on the side.