Where to buy property in Rhineland Palatinate, Germany 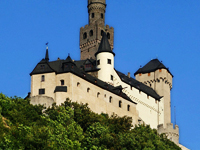 The state of Rhineland-Palatinate centres on its wine industry. It is the top supplier of wine in Germany. Most of its regions but particularly those of Rheinhessen, Pfalz, Mosel, Mittelrhein, Nahe, and Ahr are renowned in Germany for their excellent wine.

Its capital, Mainz, is therefore called the capital of the German wine industry, as it houses the German Wine Institute, the German Wine Fund in the Haus des Deutschen Weines (House of the German Wine), as well as a venue for wine quality controllers and tasters. Not to be left out is a Wine Bourse which brings together the cream of wine merchants and makers to Mainz.

The cathedral cities of Speyer, Worms, and Mainz are all dominated by their Romanesque cathedrals. Speyer's remained true to the original, while the cathedrals in Worms and Mainz received Gothic additions.

The Mosel Valley is for many an even more spectacular destination than the Rhine. The valley is narrower, the hills steeper, and the river meanders constantly. Villages are mostly small and picture-perfect. Castles and castle ruins line the banks of the river. Burg Eltz, Burg Eltz, a castle that was never destroyed in eight centuries, is arguable the best-looking medieval castle in Germany.

This state is also a major wood producer, with the Palatinate Forest within its territory.

The landscape of the Rhine Valley extending from Bingen and Bonn is glorious, dotted with castles and vineyards. Its beauty has been immortalized by bards and artists through the ages.

Trier, the largest town on the Mosel, is the oldest city in Germany and has the largest collection of Roman ruins on German soil. Among its famous sons is Karl Marx, whose birthplace is now a museum. You could mistake Trier for an Italian town with the number of Roman ruins and mosaic in the city; an amphitheatre, roman walls and stones, 7 Roman villas. Right in the centre of town stands Trier's cathedral, on top of a former Constantinian Palace. Trier's cathedral is considered the largest Christian church in antiquity and as such listed as a heritage site by UNESCO.

Of equal fame is the parish church St. Michael's in the suburb Trier-Mariahof. It is a modern church, built in 1969 and represents the contemporary ecclesiastical architecture.

Mainz was always a seat of learning. Johannes Gutenberg was born in Mainz 600 years ago, and it was here in the 1450's that he invented the printing press. Mainz had a university as early as 1477, which was closed by Napoleon's troops in 1798. Together with Speyer and Worms, Mainz was also one of three important centres of Jewish theology and learning in Central Europe during the Middle Ages. Known collectively as Shum, the cities of Speyer and Worms and Mainz played a key role in the preservation and propagation of Talmudic scholarship.

Famous for its Carnival, the Mainzer Fassenacht or Fassnacht has developed since the early 19th century. It has its roots in the criticism of social and political injustices under the shelter of cap and bells; today, the uniforms of many traditional Carnival clubs still imitate and caricature the uniforms of the French and Prussian troops of the past.

St. Martin's Cathedral is an imposing site which was built of light stone in romanesque style. The cathedral houses many treasures. The Electoral Palace, initially built as a seat for the Electors and Archbishops, now stages the Romano-Germanic Central Museum exhibition.

St. Stephen's Church, which is to be found in the south-west of Mainz, was built in 990 by Otto III. It was basically erected as an imperial place of prayer for peace.

The Old Town, or Altstadt, is Mainz's pride. Many squares and lovingly-restored half-timbered houses and magnificent Baroque churches give the Old Town its charming atmosphere. Hidden behind its Rococo fa�ades and hidden in its bourgeois Baroque houses are elegant boutiques, caf�s, and wine bars.

Auf dem K�strich is a picturesque district above the city and the old town, just a few minutes walk from the city centre. It is quiet, offering nice views as it is a bit higher than the town, with 18th and 19th century houses.

Speyer Cathedral, built in a Romanesque style, is a UNESCO World Heritage Site. History lies buried in the crypt and artistic sculptures enrich the surrounding gardens named, Mount of Olives. Another must-see or rather must-climb would be the Old Gate, the tallest of its kind in Germany. Once you're at the top of this city gate, you get spectacular views of the town spread out all around you like a fairytale kingdom. Church spires, towers, gardens, and woods make this an unforgettable experience.

It's not just the views, the structure itself is a beautiful specimen of historic architecture with many details to be found in-house Museum.

More history is to be found in the Jewish Courtyard, the Town Hall, Memorial Church, Trinity Church, St. Magdalena, and St. Ludwig. Don't forget to visit the Old Mint, the Sculpture Garden. As a contrast to all this is the exciting and popular Technik Museum with its submarines and aeroplanes on display.

In Worms, medieval history dominates the present as you can see from the impressive architecture that dots the skyline with steeples, towers, and ramparts.

One of the oldest settlements in Germany, Worms has so much to offer visitors. Worms enjoys placid scenic vistas beneath clear blue skies making a perfect backdrop for all those historic monuments.

The 11th century Romanesque Cathedral of St. Peter and St. Paul is the most popular historic icon in town. It has four towers and twin domes and the altar is in baroque style. The Liebfrauenkirche, is another interesting piece of architecture and is surrounded by vineyards.