Where to buy property in Recoleta, Chile 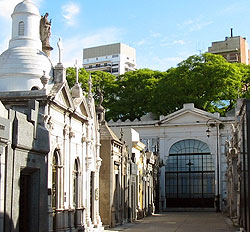 Just north of Santiago Central, the commune of Recoleta is known mainly for its Cementerio General, where the late democratic presidents of Chile repose. There is a monument here to those who were lost during the military regime.

Despite its famous cemetery, Recoleta is hardly a grim place. Its popular Buenos Aires Tango Club has large ballrooms where dancers can tango, or salsa, or do any other dance to their hearts content.

With seven Metro stations, Recoleta is well connected to the rest of the city. The local government is currently promoting "Recoleta Ponte Bella", a commune-wide renovation project that aims to restore Recoleta to its early 20th century elegance. One of its goals is to encourage the community to learn more about Recoleta's architectural and cultural heritage, which includes its five churches and the cemetery's Plaza de las Columnatas, which had been left in ruins after an earthquake had badly damaged it. Recoleto's semicircular Plaza La Paz, on its border with the neighbouring commune of Independencia, is also scheduled for urban renewal into a cultural and recreation area where events like concerts can take place.