Where to buy property in Podil, Ukraine 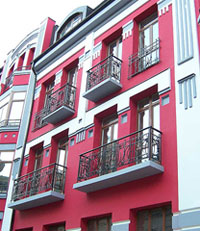 The Podilskyi raion is one of the oldest in Kiev, and the birthplace of Kiev’s trade, commerce and industry. Podil’s and its main neighbourhood Podil’s names are from the old Slavic word ‘podol’, meaning lowlands. As the name implies, it runs flat alongside the Dnieper River.

The raion is littered with historical landmarks, including the Frolivskyi and Pokrovskyi Monasteries, the House of Ivan Mazepa, the House of Peter the Great, the Fountain of Samson, and the Zamkova Hora hill.

The Andriyivskyy Descent, a winding, hillside street, links the city's administrative upper town with Podil. Its famous landmarks are the 18th century Saint Andrews Church, the castle of the Richard the Lionheart, and the house of prominent Russian writer Mikhail Bulkagov. Souvenir shops and art galleries line both sides of the street.

In the old days Podil was the city’s river port. Present-day Podil is home to well-to-do students of the arts.

Podil’s narrow streets, lined by two-storey buildings, remind one of the life in the Old Kiev before the revolution. Old street names dating back to Kievan Rus can still be found here. Along the quiet streets are pre-Soviet buildings and a nice selection of restaurants, in contrast to Khreschatyk, which is dominated by the monumental architecture of the Stalinist Era.

The National University of Kyiv-Mohyla Academy, one of the oldest and most prestigious schools in Kiev, sits on the banks of the Dnieper. It is a stone’s throw from the Andriyivskyi souvenir street market and a funicular railway leading to the Mykhaylivskiyi and St. Sophiyiskiy cathedrals.

Podil’s cult street Andriyivskyi is famous for its beauty and its bohemian character. Renovated in the 1980s, Andriyivskyi uzviz is now home to abundant and ever-growing artistic activities and should be at the top of any art aficionado’s itinerary.

Several important events in Ukrainian history happened in Zamkova Hora Hill. It has a mystical prehistory, being one of the lysa hora ("bald mountains") or sites of witch gatherings. It is now a small landscaped park containing grave monuments.

The “Fisherman's Peninsula”, Rybalskyi is a predominantly industrial area on the Dnieper River. Sustaining heavy damage in World War II, it now houses new factories, a river port, and the main compound of the Ukrainian military intelligence agency.

There are plans to reconstruct the peninsula with residential and business buildings, underground parking, hotel-office towers, trade centres, and socio-cultural centres. In addition, a metro station is being built on the peninsula.

The historical neighbourhood of Kurenivka is famous for once hosting Cossack camps, and some historians even attribute the origin of the name to these camps, with “kuren” meaning “Cossack caps”.

Vynohradar is a historical neighbourhood. Main roads in the area include the Prospekts Pravdy, Svobody and Radianskoi Ukrainy.

In 2008, the government turned a wasteland in one of Vynohradar’s residential areas into a public park with trees and gardens.