Where to buy property in Pest, Hungary 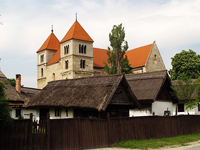 Pest county is often refered to as the "heart of Hungary", due to its geographical location, but also because the nation's capital is here, Budapest.

Pest's natural heritage is beautiful. The hills of Visegrad, the Pilis and Borzsony, are carpeted with beech and oak forest. The largest river of Hungary, the Danube, is at its grandest in Pest, and offers a romantic countryside and has been a long-time inspiration for numerous artists. The county also has many protected natural reserves, such as a 5,000 hectare portion of Kiskunsag National Park (Kiskuns�gi Nemzeti Park).

Pest was the centre of the �rp�d Age Kingdom of Hungary, Hungary first recorded history. The royal seat was founded in Visegrad, and annually, Palace Games are held in Visegr�d a 3-day festival celebrating Visegr�d's formal royal medieval glory. Partipants dress in period costumes for parades, jousts, and archery competitions. Local craftsmen sell their wares while jugglers, musicians and puppet performers engage the crowds with their trickery and skills.

Visegr�d is famous for the remains of the Early Renaissance summer palace of King Matthias Corvinus of Hungary and the medieval citadel, a unique assemblage of a medieval and early Renaissance monuments. Some are the first products of Renaissance art outside Italy.

The Triumphal arch of Vac, also called Kokapu (stone gate) is a commanding neoclassical structure, built in the 18th century to welcome the arrival of Empress Maria Theresa.

Other architectural gems are the grand neoclassical mansions in Dabas, the baroque Blagovestenska Serbian Orthodox church in Szentendre, and the modern wooden Calvinist church in Budakeszi.

Then there is the baroque palace at Godollo, about 30�km northeast of the outskirts of Budapest, �originally built for the aristocratic Grassalkovich family. Its construction began around 1733. Later Franz Josef, Emperor of Austria and King of Hungary and his wife Elisabeth ("Sisi") had their summer residence there.

Should one want to daydream through the beautiful Pest countryside, travel by steam engine. Watch out for the tunnel between Pilisvorosvar and Piliscsaba. At nearly 1 km long, it is the longest tunnel in Hungary.