Where to buy property in Panama, Panama 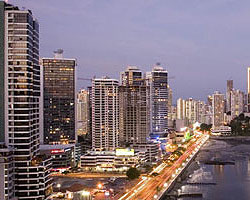 Panama City (pop: 1 million) is the political and administrative capital of Panama, with a host of businesses and tourist attractions.

The city is quite packed - and yet one of the best places to retire to, according to International Living Magazine. Condominiums and high-rise buildings still being built everywhere. �The planned expansion of the Panama Canal is attracting more and more businesses, which will push the city's economic growth up further. �Panama City has one of the best telecommunications and Internet systems in the world. Tourism is at a high, and hotel occupancy is one of the highest in the world.

Casco Viejo, or the Old Quarter, is one of the most charming areas of the city, with colonial architecture and balconied, narrow cobbled streets.� Much of the architecture that was once left to fade has recently been restored, and with excellent results.� It attracts a lot of tourists, but there is also strong demand from among the city's fashionable elite, turning the area into one of the country's most fashionable pieces of real estate. There's the Palacio de las Garzas - the presidential palace - the Teatro Nacional, and the Plaza de la Catedral. �Casco Viejo is a pocket dictionary of architectural marvels, with �French, colonial, art deco, Caribbean, and republican architectural styles in its 800 buildings.

Beyond the city and its buildings, there are lush tropical rainforests with a diverse set of flora and fauna. The area near Panama Canal is especially significant for bird-watchers. Those interested in marine life should visit the Centro de Exhibiciones Marinas, an institute run by the Smithsonian Tropical Research Institute.