One of the world’s biggest artificial islands, the Palm Deira (a prime area) is one of the three Palm Islands being built on Dubai’s coast. The entire project reclaims land from the Persian Gulf, with each of the islands to be constructed in the shape of a palm tree.

The Palm Deira on the eastern coast of the emirate arises between Port Hamriya and the mouth of Dubai Creek. Spanning 42 square kilometres, it will feature low-rise residential villas, townhouses and two-storey homes on the 41 fronds of the islands. Three bridges with 12 lanes each will connect the development with mainland Dubai.

The Palm Deira consists of 23 small islands and the larger Deira Island, which can accommodate one-fifth of the entire development’s total projected population of one million. The entire area is approximately the size of Greater London.

The development is divided into nine subdistricts and will be linked to the Deira district by bridges. 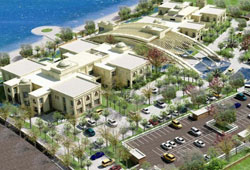 Deira Island is connected to the Deira district on the mainland by bridges. The island will serve as the entrance to the entire Palm Deira development once it is completed.

Deira Island will have a promenade, a business district, a park, a commercial area and a a marina. It is still several years away from being completed.

The development will consist of the Palm Crown on the very tip of the Palm, Deira; the Palm Fronds, separated from each other by canals and differentiated from each other by distinct architectural styles; Palm Crescent, with its low-rise housing along the beachfront; the Palm Trunk , a business district; the North Island, which has two marinas and water recreation facilities; South Island, another business district; Central Island, a major transit hub for commercial use; and Al Mamzar Island, an exclusive residential neighbourhood with its own marina.